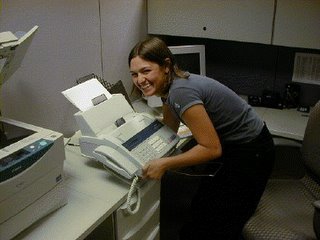 If it's Monday it must be Brussels, and if it's Brussels, it must be the budget… it's groundhog day again. And the other foreign ministers of the EU member states are not only fed up with what they believe to be British stalling tactics, they are preparing to say so.

According to Reuters, poor little Jackie Straw has promised "comprehensive proposals" on the 2007-2013 budget settlement, but only just before a special ministerial meeting on 7 December, giving little time for consideration before the European Council on 15-16 December.

Needless to say, this is not good enough for the "colleagues". "We are wasting time talking about secondary issues without tackling the real problem," one EU ambassador complained. Yet another member state official said ministers might as well exchange statements by letter and save the plane fare to Brussels since there was to be no negotiation.

We have a better idea. Why don’t they join the 20th Century and send each other faxes?