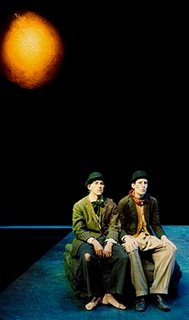 The eighth day of rioting in Paris, with the unrest spreading outwards into new parts of the country. But hey! Who cares? Certainly The Independent does not – it has other fish to fry.

Its lead today is President George Bush, "his presidency foundering and his popularity at record lows at home," who ran into new protests at a Western hemisphere summit in Argentina. And, quelle horreur, not far from the sealed-off, massively protected hotel where the leaders met, some 10,000 demonstrators marched through the resort city of Mar del Plata chanting "Get Out Bush."

This clear anti-American bias was one of the things my colleague and I talked about on the Charlie Wolf show this morning, in between talking at length about the two Davids.

It is interesting how being put on the spot during a radio broadcast focuses the mind, as indeed it did when Charlie asked me what I thought of yesterday’s televised debate. Quick as a flash – I kid you not – I came up with the stunningly original line, “Well you’ve heard of fantasy football – well this was fantasy politics”.

To be fair to Davis, I did think he talked a lot of sense on tax, and said so, but it is in his "Europe" policy, in common with David Cameron, that he dwells in never-never land.

Cameron, of course, is more vacuous, claiming that he can "handbag" the EU into giving him what he wants – which is not very much at all – but Davis, who sounds as if he has thought his policy through, has an equally unworkable plan.

Before dwelling on this, I must digress, and remind readers that, with Christopher Booker, I wrote a book on the history of the European Union – 300,000 words of it. The way we work is that I produce the briefs, from which Booker writes to final copy, to which effect I produced the best part of two million words, much of it summaries of original records, debates and news cuttings.

To get these, I read every word of the UK Parliament’s Maastricht debates, and every treaty debate since. I read over 600 books, and thousands of documents, and when it came to the first day of the EU convention on a constitution for Europe, I was there, in the Parliament, watching it.

The point – and there is a point – is that I have spent decades of my life studying this animal called the European Union. I live and breath EU politics, 24/7 and know as well as anyone how it works and what makes it tick.

And when Mr Davis confidently asserts that he can hold a referendum in the UK on what powers to repatriate, and then go over to Brussels and expect the colleagues to roll over and give him what he wants, he is wrong.

I am not sure whether Davis understands this, but for the Community to repatriate powers would require a treaty change. For that to happen, firstly the European Council must agree to hold an Intergovernmental Conference (IGC), and that that requires a majority vote.

Then there must be that prolonged and fractious process of an IGC, for which a draft treaty must be prepared, with many more drafts to follow. Throughout the process, which could take years, the UK government has - GB has to persuade all the other member states to include their changes, and to desist from adding any of their own, that would diminish the UK position.

Then, the final treaty draft must be agreed by all 25 member state heads of government/state – unanimously – at a summit meeting. And we have all too recent experience of how difficult these can be. The last, on the budget, broke up in disarray, without agreement.

Should that hurdle be overcome, and the draft be agreed, the new treaty must be ratified by all 25 member states, some of them by referendum. Any one member state can block the treaty. And this is precisely what happened with the last treaty – only two countries blocked it, France and Holland.

With the "colleagues" bruised by the experience, and beset by problems of their own, the last thing they would want to do is open pandora's box with another treaty. They would go to almost any lengths to avoid it, especially as the constitutional treaty is still "on the table" – theoretically, at least. There would, therefore, be enormous resistance even to agreeing an IGC.

Should there be one, other member states would also tabling their own proposals, leading to enormous tensions. This would precipitate yet another major crisis, which is exactly what the Community would not want. And even, should a treaty be agreed, then the chance of all countries ratifying another treaty are probably nil.

Thus, on balance, Davis demanding a new treaty would almost certainly not succeed. He could create his "crisis", as he has promised, but, as the Community did with John Major over the beef ban, they would most likely close ranks and see him off.

In other words, a Davis-inspired crisis would be "trumped" by fear of an even greater crisis, so his tactics would get nowhere. To get through to the "colleagues", he would have to invoke the "nuclear option" and create an even bigger crisis by threatening to leave. This he refuses to do and thus, I believe, his current strategy is valueless.

That is my analysis – my expert opinion, if you like. It comes from all those years of study, analysis, discussion, writing and thought. What Davis is offering is indeed "fantasy politics".

Given that I believe he is offering the impossible, I don't know what worries me most – that he genuinely believes that it could work or that he is cynically offering the Eurosceptics in his Party something that looks superficially attract, in the hope of capturing their votes.

Either way, this is not a man from whom we can expect salvation. We will have to wait longer for grown-up politician. And that, it seems, is rather like waiting for Godot.