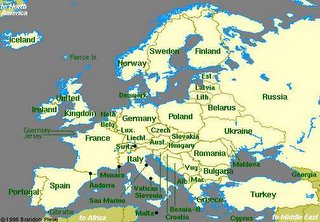 "I love my family, I love my children, I love my dogs, but I don't love Europe." So says Reijo Kemppinen and, before you ask "so what?", he is the EU's new man in London – specifically, head of the European Commission’s UK office, a replacement for Jim Dougal, who resigned complaining about Commission bureaucracy.

And, while Paris burns, The Times has interviewed the man on taking up his new post, only to gain the "rather unexpected confession".

This, apparently is part of a new approach by Brussels, aimed at winning the hearts and minds of the British people. Kemppinen wants to transform the debate in Britain, starting a publicity drive not just to raise the profile of the Commission, and finally to reconcile Britons to being in the EU.

He tells The Times: "I am not calling for everyone to be a Europhile or a supporter of Europe, but to step away from this useless argument about whether you're a member of Europe or not." As far as Kemppinen is concerned, "The fact is that Britain is part of Europe and part of the EU and will stay part of the EU."

He has no time for the "in-out" argument, adding that "As long as every piece of work the EU produces is analysed through the argument of to be or not to be (in the EU), the journalism will be distorted. The editorial line doesn’t allow room for other arguments."

Kemppinen's post — in effect the EU's ambassador to Britain, says The Times — is often seen as the most difficult job in the Commission, not least because of the innate hostility displayed by the British to the "project" But Kemppinen, a 48-year-old Finn and a former chief spokesman for Romano Prodi, is the first non-citizen to head one of the EU's national offices.

Despite this, he intends to take the bull by the horns, taking on extra staff to change the debate by arranging conferences and seminars. He also plans to send teams of press officers out to speak to regional newspapers, and set up EU information centres around the country. 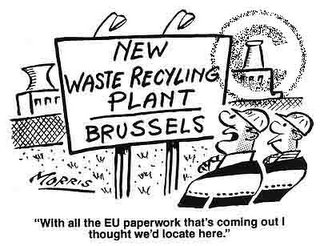 He also eschews defensively rejecting criticism, agreeing with many complaints about the EU, from excessive regulation to absurd laws, and is keen not to turn critics into enemies.

Well, Mr Kemppinen, we wish you luck. But, as always, you are barking up the wrong tree – as your ilk always does. It's not "Europe" we have a problem with – it's the European Union. Perhaps you might make it your first task to learn the difference and, just to help you out, we’ve printed a map for you.