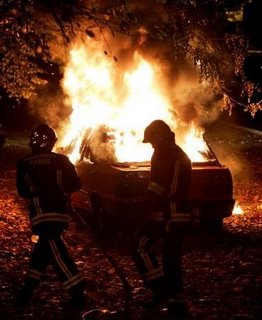 I listened to the BBC World Tonight news programme on Radio 4 last night, to hear the obligatory headlines about Blunkett, and it was some way down the bulletin before we heard that prime minister Villepin was cancelling a trip to Canada in order to deal with the riots in Paris.

That was it. The main part of the programme was taken up with Claire Balderson in Washington gloating at Bush's approval rating being at "an all-time low" – the BBC's way of celebrating the first anniversary of the president's second term.

Yet, Paris is in its seventh night of riots, with violence now spreading to several suburbs, within a fifteen-minute car ride of the centre, and the police clearly unable to keep control. Last night alone, about 180 cars were set on fire in the greater Paris region and 34 people were arrested.

And, of course, this is immigrant violence, matched by the traditional response from the less than gentle French police, witnessed by Abdel Srhiri, 52, a Moroccan immigrant, whose account was reported by the International Herald Tribune.

Srhiri went for a walk with his family after dinner on Tuesday, when he witnessed riot police firing rubber bullets at local teenagers, who in turn hurled bottles at the officers. "Bullets were flying through the air and there was broken glass - it was war, right here," he said. In his 28 years in France - and in the same neighborhood - he had never seen anything like this. "There is real aggression in the air," he added.

And here we go again. Just imagine the coverage if this level of rioting was happening in downtown Washington. Just think of the commentary little Claire Balderson would be enjoying if, after a full six days of escalating riots, the president had to take time out to appeal for calm, as indeed Chirac had to do yesterday.

The TV would be full of it and the "Washington riots" would be front page of every newspaper, with ponderous articles in The Guardian and Independent about the failure of race relations and the inadequacies of the US capitalist model.

But, of course, this isn't downtown Washington, thousands of miles away. It is in Paris, only just over a hundred from our shores, a neighbour, ally and "partner" in the European Union - champion of the "social model" of which the Guardianistas and the Beebees so approve.

So, what do we get? Down page, down bulletin items and no comment. Ah, come on.