Over before it began 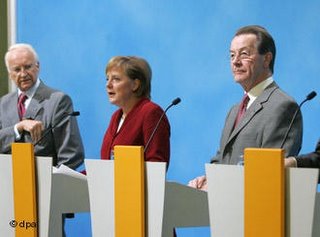 Remember those heady days when the German Christian Democrats under Angela Merkel were going to re-write the script in Germany? When they were going to introduce reforms that would free up the economy, lower taxation, decrease public spending, turn the country once again into the motor of Europe?

Well, no, as it happens I cannot remember them either. All too long ago and overlaid by weak campaigning, an indecisive result, shenanigans between the parties.

A day ahead of schedule the grand coalition, the second in post-WWII German history has been signed, though not yet delivered, since the various party congresses have to put their seal of approval.

But, as Chico and Groucho agreed in “A Night at the Opera” we have a contract. Unlike theirs, which had been reduced to a tiny strip of paper by the destruction of all the articles either or both of them disliked, this one weighs in at 130 pages of policy detail.

Among them, we have the following items, as quoted by the BBC World Service website:

“Reports say top wage earners will have to pay an extra 3% in income tax, VAT will rise by 3% and social insurance contributions will also go up.”

Curiously, the BBC describes Angela Merkel as having a “tough reform agenda for Germany” Tough it may be, reform it ain’t.

Deutsche Welle adds one or two other details:

“The parties agreed in their program to raise the main value-added tax rate by three points to 19 percent from 2007, an unpopular measure whose revenue will be used to plug the budget and lower non-wage labor costs to promote hiring.

The retirement age will gradually be raised to 67 from 65.

One crucial area where the new government will continue the legacy of its predecessor is nuclear energy.

Schröder's government had committed itself to gradually phasing out nuclear power, a point that most conservatives opposed tooth and nail. The issue was set to be one of the most serious stumbling blocks in coalition negotiations between the two sides. But Merkel's new government, in a sign of compromise, now says it will continue on the same course and shut down all of the country's nuclear power plants over the next two decades.

On foreign policy, the incoming government will seek improved relations with the United States -- strained over German opposition to the Iraq war and strengthen ties with European Union partners.”

Presumably, Germany will become more and more reliant on Russian gas and oil, thus limiting its ability to deal with that country in any sensible fashion.

It is good to see that Merkel intends to keep her promise to abandon the disastrous policy of being a French poodle and will improve relations with the United States. Strengthening ties with European Union partners? What on earth do they mean by that?

Sooner or later all these countries (and, increasingly, Britain) will have to face the unavoidable fact: a high tax, high regulation economy does not work. And the longer those reforms are postponed the more painful they will be.