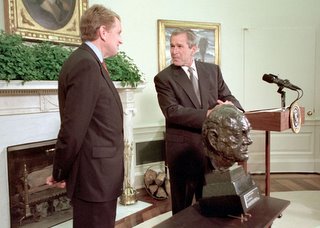 This posting has to start with a declaration of interest: ever since the glamorous Sir Christopher Meyer and his even more glamorous wife Catherine took up residence in the British embassy in Washington DC, I have experienced extreme nausea at the mention of their names.

This, I suspect, had something to do with the endless, sick-making drooling of the media about their youth, their charm, their glamour, his brilliance and her elegance. The last time we had that sort of adulation going on about the charm and glamour of the couple that was supposedly representing this country in the United States was back in the days of the Jays, Peter and Margaret. That came a cropper with scandals, infidelities and broken marriages all round.

If we must have ambassadors, a questionable proposition in this day of easy communication, they should not, in my opinion, be self-publicizing glamour boys or girls. The Meyers seemed the epitome of Blairite politics and diplomacy. So, I was not unduly surprised when Sir Christopher proceeded to stab the Prime Minister and the entire government severally and together in the back by publishing a somewhat self-serving (his brilliance as described by himself in his book appears to be undeniable) memoir of his days in the American capital.

Well, now, before we start to laugh too heartily at another problems Tony Blair seems to have encountered, let us have a look at the truth of the matter.

Sir Christopher Meyer is a civil servant, a diplomat. One assumes he signed something called the Official Secrets’ Act at some point in his career but that does not seem to inhibit anyone any more. As ambassador he was in a position of trust and confidentiality. Above all, he is not supposed to engage in open party politicking. Two years after his ambassadorship he is not exactly expected to diss his employer, the British government.

One of the big questions in this rather distasteful saga was asked by Ferdinand Mount in today’s Daily Telegraph:

“So why did the Cabinet Office wave the book through without suppressing a semi-colon? I cannot imagine such a thing happening under Heath or Thatcher. It is, after all, a longstanding rule that former ambassadors do not publish books containing confidential stuff on topics that are still hot.

And this rule is certainly not defunct. The Foreign Office has just refused Sir Jeremy Greenstock permission to publish a memoir of his time at the UN, originally due out last week.”

That is rather a pity. I, for one, would like to know more about the shenanigans at the UN and whether the British legation there was really quite as gormless as it seems to have been. But these things are not to be revealed. A story denied by a politician must be true; a book banned by the Foreign Office must be important. (Well, actually, that does not always work. Many a banned intelligence memoir turned out to be of no interest or importance whatsoever.)

Mr Mount’s explanation is that Blair is now fair game for everybody; that his “joined-up government” has turned into “Cock-Up Central”.

Maybe. But there is another force at work here. Some call it the politicization of the bureaucracy but it is more the turning of governance away from politics towards management. Or, as my colleague would put it, the Monnet method.

Setting aside the pros and cons of the 90-day detention, and the cons outweigh the pros enormously, despite Melanie Phillips’s rather hysterical outburst about “Britain’s moral imbecility” in people wishing to protect a few of our remaining liberties, the idea of the police getting involved in political lobbying is outrageous.

Police officers are not supposed to be seen in overt political behaviour. They are the servants of the people and are regulated by elected politicians. Charles Clarke’s comment that this controversial measure must be put through because the police wants it was extraordinary. People on every side of the political spectrum asked the same question: who legislates – the elected Members of Parliament or the unelected, unaccountable and, frankly, rather inadequate police force? (Of course, on most matters we know the answer: the EU legislates.)

In many ways Blair is reaping the rewards of his own policies. His government has set up more unaccountable organizations and positions than any before and the Conservatives were not exactly sluggish in this respect. We have all lost track of the many task forces, czars, quangoes that have come and gone without any “blue sky thinking”. And then they wonder why people are disillusioned with politicians and do not bother to turn up to vote.

This is not simply a question of a politicized civil service. It is a development that can be seen across the world and has been encouraged and pushed by Tony Blair, not just internally but in his obsession with transnational organizations.

In the United States we have seen the CIA blatantly becoming involved in political activity against the elected President, who is, according to the American Constitution, the commander in chief. Despite constitutional prohibition of foreign laws being imposed on Americans, there has been a growing tendency in the Supreme Court (probably to be stopped by the new Chief Justice) to use foreign and, particularly, European precedents for their decisions.

Here we come to the crux of the matter. This is, of course, the European model. EU legislation is initiated by the Commission, a political civil service, and goes through a long and complicated procedure that unrolls regardless of elections, changes of government in member states or, even, changes of balance in the European Parliament.

It is governance by management, justified by two spurious arguments: politicians cannot provide the sort of expertise that that administrators can; and politicians look to short-term results and benefits because they are hampered by electoral necessity.

I have no doubt that many in the CIA have justified their disgraceful intervention in the American political process by the same spurious arguments.

We see it at all levels, from the unelected and unwanted regional assemblies all the way to the transnational organizations, the chief of them being the United Nations. Unelected bureaucrats and lawyers, all pushing their own political agenda, are claiming the right to overrule politicians who, for better or worse, have been elected by the people and have to account, however imperfectly, for their actions and decisions to the people.

As for expertise, particularly in matters that touch on economics, finances, environment, agriculture, numerous other issues, those who really have it are not going to be in the civil service, the Committee of Permanent Representative in Brussels or in the various administrations of the various tranzi organizations. They are the people who are actually creating wealth or dealing with matters arising from that process. They are the people to whom politicians should be answerable.

The role of administrators should be secondary to all of them. And yet, as the European model becomes more and more accepted, they are the ones who are emerging as our masters. At least Sir Humphrey pretended to take instructions.