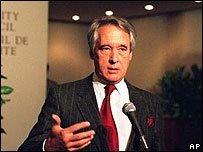 It has begun. The first person to admit that yes, indeed, he did take money from Saddam Hussein as part of the oil-for-food scam, is Jean-Bernard Mérimée, a distinguished French diplomat (aren’t they all?) and one who holds the rather bizarre title of “ambassador for life”.

M Mérimée told judge Philippe Courroye that he was very sorry that he took the $156,000 (then worth about £108,000) in 2002, allegedly to renovate the house he owned in southern Morocco. What is interesting about the date is that at the time M Mérimée was not French ambassador to the UN but special adviser to SecGen Kofi Annan (father of Kojo).

It seems that M l’ambassadeur, according to Le Figaro, as quoted in the Daily Telegraph is only half regretful. Clearly he regrets having been found out but he does not precisely see what is wrong with being paid for services.

The money, according to him, was in recompense for the work he did for Iraq and work must be paid for. Well, that is not completely unreasonable. It just depends on your definition of Iraq.