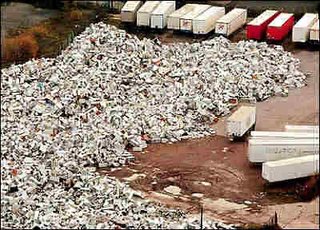 It used to be, as the great Yorkshire saying went, where there's muck, there's brass, but that has now been overtaken by the great European Union which is creating untold wealth for a select few in the recycling business.

According to the Telegraph business section today, Britain’s largest scrap metal group is coining it, having seen sales surpass £1billion for the first time last year. This is after tackling 20,000 cars and 12,000 fridges a week handed over for scrapping, all courtesy of the EU.

The firm in question is European Metal Recycling, which has recycled its one- millionth fridge at its £2.5m purpose-built facility in Willesden Junction, in north-west London, and has reported company profits nearly doubled to £101m in 2004 on sales 40pc higher to £1.15billion.

The company is chaired by Philip Sheppard, dubbed "the god of metal recycling", and who this year leapt from equal 206th to equal 93rd in the Sunday Times Rich List with his family and their estimated £510m fortune, with the highest-paid director receiving £6.75m, including pension contributions, up from £5.95m in 2003.

Meanwhile, on Radio 4's Westminster Hour last night Andrew Rawnsley ran a feature on the expected increase in council tax, hearing complaints from Wolverhampton Council that the current government targets on recycling were adding at least a £1 million to the council’s annual bill – with not a single mention of the EU.

Likewise, Bradford's current edition of its local propaganda news sheet, Community Pride, proudly headlined its "Waste crime clampdown", recording how fly-tippers were among the targets "during the biggest crackdown on waste crime ever".

Of course, with the Landfill Directive coming into force in July last year, closing down nearly 190 of the 200 toxic waste tips in the country, and making tipping so much more expensive and difficult, fly-tipping has become epidemic throughout the nation - but this is not mentioned.

Never mind, according to Community Pride, officers from Bradford Council's environmental services department, with "colleagues" from the Environmental Agency, West Yorkshire Police, West Yorkshire Trading Standards, Leeds City Council and Customs and Excise, were on the case, in their fabled clampdown.

Small wonder that Ruth Lea is complaining in today’s Personal View that: “Our overweight public sector is threatening to devour the economy”. But, for those officials, on their weighted salaries, guaranteed annual increments and final salary pensions, they're not worried. They are too busy blessing the EU for the job opportunities it is creating.