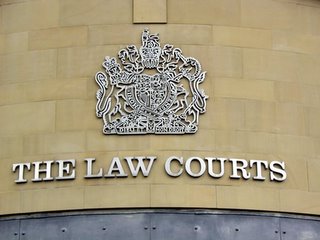 The Times this morning picks up on our story posted the day before yesterday on the saga of criminal penalties applicable to EU law.

Headed, "EU to take Britain's right to decide what makes a crime", by the egregious Anthony Browne, the strap-line runs: "Brussels has listed seven offences that it wants to become the first pan-European crimes", setting the scene for a highly alarmist report.

Far be it for us to undermine what is evidently a bonanza for Eurosceptics, so we can afford to revel in the statement that "Brussels unveiled detailed proposals yesterday that would for the first time create a body of pan-European criminal law and force member states to punish citizens who transgress it."

Continues The Times, "The ruling means that for the first time in British legal history, the British government and Parliament will no longer have the sovereign right to decide what constitutes a crime and what the punishment should be." And so on it goes.

The only problem for us is a certain irritation at the sheer amateurism of the piece. For a start, this is not, as Browne asserts, a ruling. It is simply a commission communication, setting out the commission's view on the ECJ judgement. And neither are these "pan-European" crimes. They are crimes, as determined by member state laws – albeit at the behest of the Community - and they already exist, having been defined by the Council under "pillar three" of the treaty.

But, as to the substantive point, it has always been implicit in the EU treaties that member states should adopt appropriate and proportional penalties, applicable to their citizens, for failures to comply with EU law transposed into their own legal codes. After all, if member states adopted the laws but imposed no penalties, the laws would have no effect.

What the ECJ judgement does, however, is clarify the commission's powers, giving the acquis primacy over "pillar three" decisions. It also states explicitly that the commission has the right to propose "appropriate measures of criminal law" but, "only on the condition that there is clear need to combat serious shortcomings in the implementation of the Community’s objectives" and to "provide for criminal law measures to ensure the full effectiveness of a Community policy…".

If media sources take exception to this, we are happy to see the outrage expressed, but the truth is that we have been subject to criminal laws imposed by our own government, in relations to offences created by the Community, ever since we joined the EEC. To that extent, our picture, showing the Royal Coat of Arms, has been a fraud for many years. When, as they do so often, our judges convict people for breaches of EU-inspired law, it would be more honest if they sat under a ring of stars.

Despite this, there is nothing especially new in the current developments, but, whatever. Enjoy the moment.