Things are stirring across the Continent 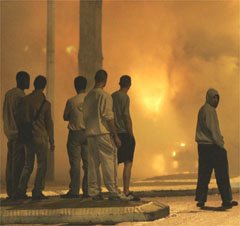 One way or another, things are stirring but you wouldn’t know that from our own esteemed media. The BBC World Service finally put the French riots at the top of its website yesterday but demoted the story again in favour of the anti-free trade demonstrations in Argentina. At least, it is there, as the lead European story.

From this morning’s newspapers you would not have guessed that serious riots are spreading around the capital of our nearest neighbour. Some of the American newspapers are covering the story and it has gone like wildfire, if I may use that expression, round the blogs.

It is only from the blogosphere (mostly American) that you can find out about the Danish events, if you do not happen to live in Denmark, though the Canadian media has picked the story up. The Daily Telegraph today did have a rather uninformative article by Kate Connolly, reporting from Berlin. Someone should tell Ms Connolly and her editor that the war ended sixty years ago, Denmark was liberated some time before that and Berlin is not the capital of western Europe. How long does it take to get to Denmark from Berlin and find out what is going on?

The article gave no details beyond that already available on the various blogs and a few interviews, clearly conducted by telephone, one with the Dutch MP Ayaan Hirsi Ali, a courageous lady of strong opinions, but not a Dane. It was not even clear from the article whether the riots were over or whether they were still going on and there was a definite feeling that Ms Connolly thought that the rioters had a point. Prime Minister Rassmussen’s stand for free speech was explained by his reliance on the support of anti-immigration groups. Nice to know journalists care about such details as freedom of the press.

Elsewhere in the media, Denmark was not even mentioned. A not so far off country, of which we know nothing.

Another story that seems to have escaped most of our journalists is the big demo and vigil outside the Iranian embassy in Rome that was protesting against Iranian threats to obliterate Israel.

The two night vigil has excited some debate in Italy on whether there was any point to it and whether this was the right way of dealing with the problem. But the fact remains: thousands of people went out in support of Israel and to protest the Iranian President’s statement. It has been reported in China and India but here only the Financial Times ran an article.

The demonstration and the vigil was organized by the right-wing newspaper Il Foglio and had the support of numerous politicians and public figures. Two ministers, Giancarlo Fini and Antonio Martini expressed their support but did not join it, for fear of making the life of Italians in Iran more difficult.

The official Iranian media immediately poured abuse at the demonstrators, labelling them zionist warmongers and threatening them with the annihilation as well. And, of course, a counter-demonstration went to the Italian embassy in Teheran.

Interestingly, Italy, as Michael Ledeen of the American Enterprise Institute, is breaking the mould – a debate is growing in that country (as in Denmark) about freedom of speech.

Magdi Allam, the Muslim Deputy Editor of the Corriera della Sera, wrote a front-page editorial last week, in which he openly discussed the need for Arab states to recognize Israel’s right to exist in order to proceed with a peaceful solution to the Palestinian woes. In the teeth of Islamic and, one may add, a great deal of West European opinion, he made it clear that he did not think the problem was the fault of Israel alone.

This may not seem as important as whether banks have banned the use of piggy banks – the issue remains unresolved – but, surely, we must pay attention to the fight for freedom of speech, whether it happens in Denmark or Italy. And it might be of interest to the British reader that there are large demonstrations in Rome or riots in Århus.