Is our government completely mad? 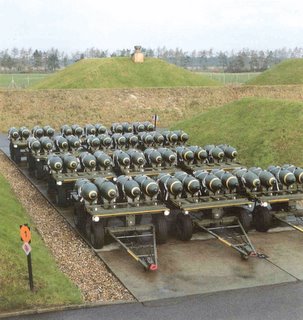 The only military explosives factory left in the UK is to be closed down, with production possibly moving to Bordeaux France, in a deal between the factory operator BAE Land Systems and the state owned French company Societe Nationale des Poudres et Explosifs (SNPE).

The unit to be closed is the former Royal Ordnance factory in Bridgewater, Somerset, now owned by BAE Land systems. It not only makes explosives for artillery shells, bombs and solid fuel for missiles, but also produces unique components for Britain's nuclear weapons.

The closure is one of two announced by BAE, the other at Chorley, near Preston in Lancashire, which produces ammunition, another facility vital to the security of Britain's defences.

This is part of what has been termed the "rationalisation" of the European missiles and explosives industry, which has already seen a partnership between BAE Systems and Paris based Giat Industries to produce the guns and ammunition for the next generation of British armoured vehicles.

Predictably, in view of the job losses, the move has been condemned by the engineering union Prospect, which said it threatened the supply of ammunition and explosives to the MoD, leaving the UK entirely reliant on foreign suppliers.

Concern has already been expressed by the House of Commons Defence Committee, which has already expressed its concerns over security of supply.

In 2002, it expressed its fears that if Bridgwater was to cease to manufacture then explosives would have to be imported from other suppliers, which would require a very large stockpile of explosives for production purposes.

There was, it felt, an increased risk in safety in transportation from terrorism and normal shipping and road accidents. But, crucially, it was concerned that only by keeping the only military high explosive manufacturing facility in the UK would the government be in total control of its foreign policy.

No foreign government, it said, would be able to interfere with the supply of explosives, as was seen in the Middle East conflict when Belgium refused to send Britain supplies.

Amazingly, though, the MoD has dismissed these concerns, saying of the Bridgewater and Chorley closures that they were "a matter for BAE Systems". Given the implications raised by the Defence Committee, we can only ask whether our government is completely mad?