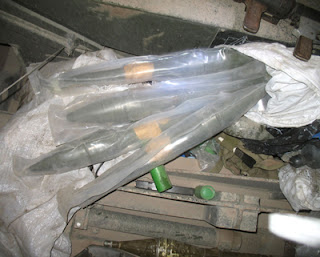 British troops, we are told by the MoD have conducted a reactive strike operation after an indirect fire attack on Basra Palace.

Those involved in the attack, says the MoD, were observed and tracked to a building west of the Al Jameat district of Basra City. How they were observed, and by what means they were tracked, is not stated. But it appears to have worked.

Thus, an operation to secure this location was quickly launched. On their way to carrying out the raid the soldiers, from the 1 Staffords Battlegroup, came under attack from small arms fire and Rocket Propelled Grenades (RPG) but the patrol continued to its target. 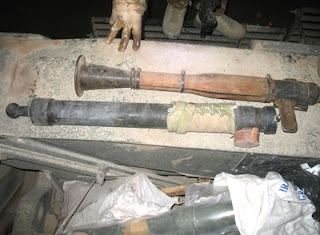 At just after midnight local time, UK troops launched the operation on the property, where it was believed illegal weapons and ammunition were being stored. The raid uncovered a significant arsenal of ammunition, weapons and bomb-making equipment, hidden in a vehicle at the property. These included a 107mm rocket, 6 Rocket Propelled Grenades (RPGs), some of which were still in their primary packaging (pictured), a mortar launcher and a number of 60mm mortars.

Says Major David Gell, the UK military spokesman in southern Iraq, "I believe the operation demonstrates the ability of UK forces to deal with the threat of Indirect Fire on its bases robustly and swiftly. These people now know that if they attack us we can strike back quickly and effectively."

All we can say is it is good to know that, finally, the British Army is responding, instead of adopting the "sitting duck" position. What took them so long?