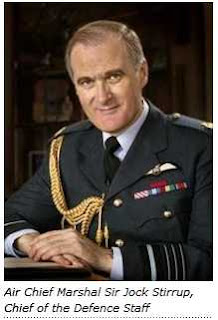 Obligingly confirming our thesis – that our military chiefs have lost the plot - Air Chief Marshal Sir Jock Stirrup, Chief of the Defence Staff, was up in front of the increasingly lacklustre House of Commons Defence Committee yesterday to give his views on the state of our forces.

Stirrup's major whinge, as noted by The Times, was that, with thousands of troops in Iraq and Afghanistan there was "not much more left in the locker". But this was not a complaint about having to meet present commitments – oh no! This was about not being able to engage in any new large-scale fighting "for some years to come".

More detail comes from the BBC website where we see our Jock articulating his concern about training for future, as yet unspecified tasks. "If we are able to reduce the operational tempo, as we hope and intend to, over the next 18 months…", he says, "then we should be in a position to reinstate some of this training." But, he adds ominously, "quite clearly we are not going to be in the business of engaging in large-scale, high-end war fighting operations for some years to come." 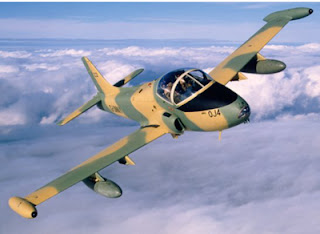 There we have the evidence of that mindset that regards the current campaigns in Iraq and Afghanistan as aberrations and which is obsessed with "real", i.e., "high-end" warfighting operations. Interestingly, our Jock, earlier in his career, served on loan with the Sultan of Oman's Air Force, operating Strikemasters in the Dhofar War, so he should know better than most what is needed for successful counter-insurgency operations.

However, you get no sense from his evidence that he is at all focused on the tasks at hand and, only if we do not reduce the overall level of commitment does he suggest that we "are going to think about the overall force structure". All the time, his primary concern seems to be the need to "train up a new generation" - no doubt, for this "high end" warfighting.

Putting this in perspective, this is rather like Montgomery complaining that the resources devoted to the invasion of Normandy were interfering with training schedules for the Korean War. That he did not know there was going to be a Korean War is precisely the point. Yet our chiefs, these days, seem to be ignoring the present, in order to deal with the unknown future.

Thus it is that we see a battle group operating in Maysan Province so bereft of air cover that it is relying on light aircraft from the Iraqi Air Force. 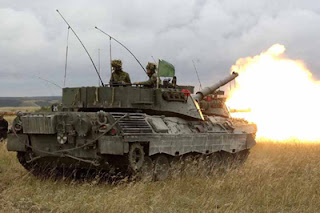 And while the Nato "Operation Achilles" launched yesterday is being spearheaded by British troops, we now learn (and not from the British media) that the forces are relying for their direct fire support on Canadian Leopard tanks.

This really does seem to be where the disconnect lies. While our troops have acquired the label Flintstones for the antiquity of their equipment in current theatres, our brass is more concerned about equipment (and training) for wars to come. They are, in effect, robbing the present to pay for the future heedless of the fact that, unless we deal with what is, there may not be a future.