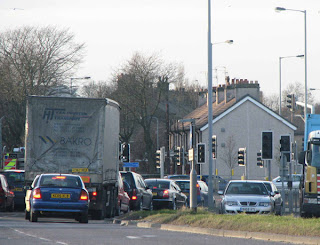 On its front page today, The Times runs an "exclusive" on road charging, revealing that Britain "will be divided into a patchwork of road-pricing zones where drivers will be charged varying rates". This, says the newspaper, will allow the government to make motorists pay by the mile without tracking them on every road.

Ministers "believe" that a zonal system would protect drivers' privacy and deter them from rat-running in residential areas to avoid high charges on main roads. All roads in each zone would be charged at the same rate, regardless of how congested they were.

It does seem that the government has taken on board the main concern of users, which "appeared to be that road pricing would allow every driver's movements to be tracked through a satellite positioning device in each car." The idea is that that tracking could be avoided by abandoning the idea of having a complex charging system in which the price varied from street to street.

This is Dr Ladyman, the current roads minister, who does not seem to have thought this through. If the system is still based on charging per mile – as seems to be the case – then how would the system detect the mileage travelled by each vehicle, other than by tracking them?

Further, if the charging basis is levied according to zone, it ceases to be a congestion management tool. All drivers will have experienced, for instance, the flow of vehicles into a city in the morning rush hour, with the roads absolutely choked, while the opposite direction is completely clear. How could the term "congestion charge" be justified when motorists driving in either direction is charged the same?

What comes over therefore, is that this charge is going to be a tax and, if the system is to be based on the EU's Galileo system, it has the makings of an EU tax as well.

Either way, the dead hand of the EU pervades the working out of policy, even if Stephen Ladyman doesn’t always seem to understand it. He has, according to The Times also confirmed that the Government was considering a special charging scheme for foreign lorries to force them to contribute towards the costs of the road network.

Under the scheme, which could be introduced within two years, foreign hauliers would have to buy and display a permit, known as a vignette, costing about £7 a day.

That foreign trucks are a problem is indisputable, not least with reports they are now imposing road wear costs of £195 million per year.

But the minister must know that what he proposes is illegal under EU law – a similar scheme having been abandoned for exactly the same reason. No scheme can be allowed which imposes a different system for foreign trucks, otherwise this is regarded as discrimination on the grounds of nationality, which is outlawed by the Treaties.

This is one of the attractions of a universal road charging scheme, but this is going nowhere until the minister comes clean about the underlying agenda. And despite Ladyman’s determination to win the debate, he is not making a very good job of it. All he is managing to do is confirm our worst suspicions.