An excuse not needed 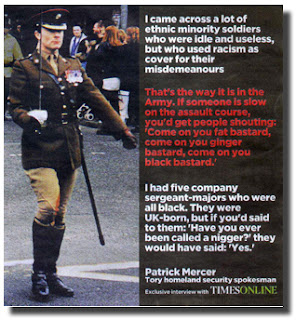 I have tried to avoid commenting on the Patrick Mercer affair, but note that, for all the torrent of comment, one central issue has been completely neglected.

The protocol applying to ministers and shadow ministers alike is that they should not speak publicly outside their own portfolios.

Mercer is a shadow minister but he is not defence. His job is homeland security and therefore he had no business speaking on the issue of racism in the Army to a newspaper. An ex-Army officer, used to the "chain of command", should have appreciated this.

He should have referred the paper to Liam Fox's office and the fact that he did not has brought its deserved reward. There can be no sympathy for him - this was a major breach of protocol, irrespective of the merits (or otherwise) of what he said.

That said, one can afford to express regret that Mercer’s own stupidity has given the media an opportunity to devote massive space (front page and two internal pages in The Times alone) to an issue which, in the grander scheme of things, is relatively minor.

With British troops fighting and dying in Afghanistan, and ISAF mounting a major operation, I cannot believe there is nothing to report, despite the thin diet of information from official sources.

Even at the best of times, the media needs little excuse to avoid reporting real news and it is thus sad that the contribution that Mercer will be remembered for is giving them precisely that.