A certain lack of humility 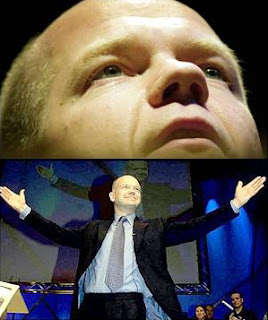 Even when trying to look at them charitably (not an activity for which this blog is famed), one is drawn to the conclusion that there is something very odd about the Tories and their emerging foreign policy.

That much is evident from shadow foreign secretary William Hague, who today was addressing the Welsh Conservative conference in Cardiff.

Despite having a free choice of subjects within his portfolio, Hague chose to home in on the tendentious issue of an inquiry into the Iraq war, declaring that the Tories will invite Labour MPs to support a Commons motion on one, if one is not launched by the government.

Said Hague, "supporters and opponents of the Iraq war must make sure the lessons of the invasion and its aftermath were learned", which then became criticism of Tony Blair's "sofa style" of foreign policy decision-making. As an alternative, the Tories were examining proposals for a National Security Council.

But what seems to escape Hague is that, as far as the aftermath of the Iraqi war goes, we are, in a sense, facing unknown territory. As such, we are facing a steep learning curve and are not in a position to talk about "lessons learned". Some we are still devising and, for others, we have not even completed the lesson plan.

Thus, while Hague is talking blithely about doing "our utmost to ensure that lessons are learned for the future," we need to be learning lessons now, and applying them now. If we do not, we may well not have a future.

And like it or not, the single nation most engaged in this issue is the United States. Mistakes the Americans most certainly have made but, when it comes to "learning the lessons", nowhere is the debate and the experimentation more vibrant than in the USA and in the US sectors of Iraq and Afghanistan.

It thus seems wholly inappropriate for Hague to be talking about the need for better "management" of the UK's relationship with the US. Even less appropriate is the suggestion that we need to "recover the art of managing the relationship well and making it one of permanent friendship coupled with honest criticism."

Given how far behind the curve we are in our prosecution of the war in our sectors, it seems that we are not really in a position to offer much by the way of criticism, honest or otherwise. Rather, we might be better served if we spent some time in criticising our own performance. We might perhaps benefit from a little more listening and learning, and much more humility, before we rush to the White House to offer our views.

But then, humility does not seem to be Hague, who has rehearsed this thesis before, telling us in January that we should adopt "a more critical relationship" with the United States, while developing stronger ties with increasingly influential nations like China, India, and Japan. 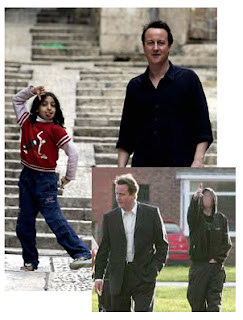 Furthermore, Hague seems to have passed on his disease to the Boy King who is currently in Israel. According to The Times, the Boy wants us to be "America's best friend but not its slave", telling it what it needed to know and not what it wanted to hear.

Once again, one can detect a certain lack of humility as he told the Israeli press that his own ties with Washington would be "solid but not slavish". One wonders whether the old-Etonian toff has stopped to think whether "Washington" will be in the mood for advice from him, and whether he has anything to tell the Americans in which they will be the least interested. Methinks he doth flatter himself.

Anyhow, while he was out doing his tourist thing in the Old City of Jerusalem, it seems a young Palestinian girl passed an opinion on the Boy's policies, rather in the manner of a certain young gentleman earlier in the week. But, if the sentiment seems rather appropriate, it also seems about as contrived as our Dave. Hands up those who think she was put up to it by a press photographer.