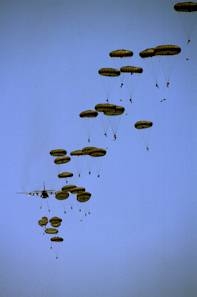 Front page of The Daily Telegraph today is the news that a shortage of RAF transport aircraft is leaving members of the Parachute Regiment without their "wings" as there are no longer enough aircraft or crews to train paratroopers.

The Telegraph puts this down to the RAF becoming stretched by operations, with an RAF official spokesman obligingly admitting that "a lot of courses were being cancelled at the last minute" because operations always had to take precedence over training, but – as always – this is only part of the story.

In fact, the "airlift capability gap" has been long predicted by the RAF, especially with the retirement of its ageing C-130K Hercules transports, and the original plan was to procure a mixture of new C-130J models and the larger C-17 Globemaster transports – both US-built - with a new fleet in place by 2005.

However, the much-denied "Europe First" defence procurement policy then intervened and, in 2000, Geoff Hoon, the then secretary of state for defence, intervened after pressure on Blair from Chirac, to order 25 of the proposed Airbus A400M military transports.

As a result, the C-130 replacement programme was cut back, and the C-17 procurement was limited to four leased aircraft, which have been subsequently purchased, with the addition on one more aircraft, but still leaving the RAF short of capacity.

The problem was that the A400M existed only on paper and, despite ever-more elaborate computer-generated images and plywood mock-ups, the projected first flight has slipped from 2006 to 2008 and the in-service date from 2009 – already too late for the RAF – to a highly optimistic 2011.

As the delays have mounted, so has the cost. Originally estimated at a mere £62 million each, each A400M is now to cost over £100 million each, including design and development costs – the NAO recently putting the total price for the 25 aircraft at £2.64 billion.

On the other hand, brand new, off-the-shelf C-130J Hercules are currently priced at £38-40 million, considerably less than half the price of the A400M, with a 20 ton payload as against the (theoretical) 32 ton payload of the latter aircraft.

Whether or now the A400M has other merits is a matter of considerable debate in specialist circles but the fact remains that the RAF airlift requirement is here and now. An American aircraft is available off-the-shelf to meet that demand but, with the politicians having committed to the European version, available some time in the future, the RAF has to go begging and the paratroops cannot do their training.

But then that is "Europe" for you – pain today and jam tomorrow although, as we know, tomorrow never comes.