Maybe this time they'll be lucky 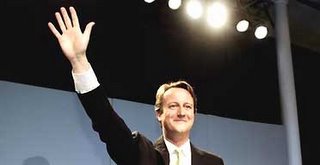 The least unexpected political development of this year has finally happened: David Cameron has been anointed as leader of the Conservative Party and we shall wait to see what happens when the media, which has been giving him an extremely easy ride until now, turns on him.

We also await with bated breath the possibility that he might actually come up with an idea for an overall strategy that might, in the fullness of time, result in a policy or so.

At present there is more negative than positive in what he says. In particular, as we know from my colleague’s posting, Mr Cameron will jettison the one clear European policy of Michael Howard’s: repatriation of the fisheries.

He did, however, say that he would take the Conservative MEPs out of the federalist EPP-ED group. It is not precisely an important issue for most people in this country but over in Brussels they are getting agitated.

The point is that back in the glory days before the last European elections the Conservative Party had a cunning plan. They would stay out of the EPP, join up with some free-market, eurosceptic East European members, and, hey presto, they would have a new grouping that would rival the EPP on the right. In the event, as we know the MEPs were marched back into the EPP-ED group. Some of them huffed and puffed and even tried to blow the house down but did not succeed.

So, maybe, this time they’ll be lucky. Or so the EUObserver thinks, in a slightly breathless article, entitled Free-market eurosceptics join forces.

Unfortunately, the author blots his copybook at an early stage by describing David Cameron as a eurosceptic, something, to be fair to the latter, he has never pretended to be. Do these people really think that euroscepticisim consists of rearranging groups within the European Parliament – something that is not certain, in any case, as a number of Tory MEPs will want to stay with their Christian-Democrat chums?

Incidentally, the article also refers to the European Parliament members as EU lawmakers.

The main story is that the indefatigable and touchingly optimistic Dan Hannan has been about his usual business: collecting right-wing free-market, eurosceptic groups and think-tanks from across Europe but also including Israel and the United States, into something called “Alliance for an Open Europe”, initiated by a “Congress of Brussels”.

We wish Mr Hannan luck. He is very good at setting up networks and they do have a great deal of use in that people who have somewhat similar views can talk to each other, exchange opinions and plan future events, though even EUObserver notes that right-wing parties from Eastern Europe, such as the Polish Law and Justice, sometimes have different political attitudes from their western counterparts.

What this particular motley network of variegated participants will achieve, remains to be seen.

But we cannot help feeling that all this excitement is a touch premature and if it is predicated on the notion that Mr Cameron is a eurosceptic who has some ideas about European policy, then it is best not to hold one’s breath.