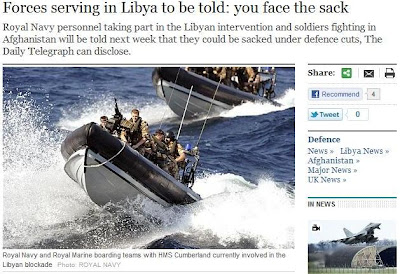 Serving members of the Army and Navy will be told on Monday that they could be among more than 2,000 uniformed personnel to be made redundant in September.

Those to be made redundant, in a programme which starts next week, will include some soldiers presently completing tours in Afghanistan. Seamen currently aboard warships and submarines in the Mediterranean supporting operations in Libya will also be told they could be included.

For the Tories, this should be political suicide. This used to be the party of the military, the one on which the military could rely on for support – although that always was a myth. But it hardly seems credible that even Euroslime could have handled this so badly, except when we remind ourselves that he never was and certainly is not now a Tory.

Nevertheless, this is not going to do him any good.