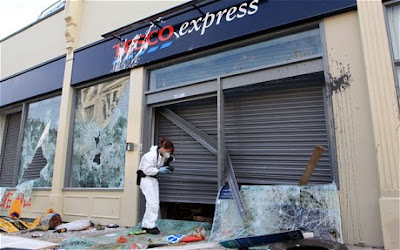 In contrast to the lacklustre reporting from The Sunday Times, we are seeing The Independent take the issue seriously.

Kerry McCarthy, the MP for Bristol East, is cited, saying: "What I can't understand is why, if the police wanted to arrest four people, they need dogs and more than 10 riot vans? If you come in with such a show of strength into a peaceful area of Bristol where the majority of people were sitting on the road with bongos and bicycles, of course it's going to spark antagonism.

"It would be interesting to see exactly what intelligence the police were acting upon that required such a fierce response. I have met with the chief constable and voiced my concerns."

Sam Barnard, 21, a student who was in Stokes Croft during the riots, said: "The police handling of the situation was overly aggressive and totally unclear. Police made the case of petrol bombs in a bid to evict the squatters but no one has been charged, and we are yet to see any evidence that petrol bombs even existed."

Predictably, Stephen Pollard in The Daily Telegraph, is pathetic. Long on rhetoric and short on facts, this is the MSM at its worst: idle, vapid and superficial – a total waste of space.

What is interesting here, though, is the gullibility of the readers on the comment thread. Pollard just has to do his "man-in-pub" routine and they all pile in, without the first thought as to whether the underlying premise is correct. One is reminded of the Grand Old Duke of York. How easy it is to march the sheeple up to the top of the hill and down again.

And therein is an illustration of the problem. The riot was only marginally about the Tesco supermarket, but the  narrative is now focused on that issue, to the exclusion of others. Only rarely does one see the slightest trace of scepticism or any attempt to break away from the pre-defined agenda. Thus can the "crowd" be manipulated, coralled, constrained - led down a particualar path and steered clear of territory where thought and analysis is not wanted.

The exercise demonstrates how it is that politicians can prosper - they lead, they define the agenda and people are only too happy to follow. Far too many of them believe exactly what they are told, without question.They think what they are told to think and do not stray outside their pre-set boundaries.

The sheeple will inherit the earth. They are the masses, the majority, the ones who will lead us via the ballot boxes to the sunlit uplands - or the Tesco superstore. This is deomcracy in action. We should be so proud.