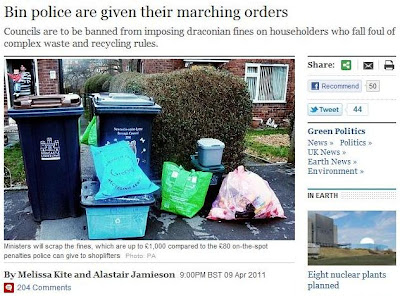 Well, wouldn't you just know it – the local elections are next month and the Tories are feeling the heat. So up pops Pickles with a crowd pleaser or two, to get the milk of human kindness flowing in the direction of Cameron's local payroll.

On the face of it, this looks an extremely good idea – abolishing fines for "petty infringements of bin rules". The only problem is that there is a certain amount of policy incoherence here. At the heart of the penalty system is the power for local authorities to compel unwilling householders to recycle, thus assisting overall compliance with EU waste targets.

If the local authorities do not meet these targets – which is more probable if they cannot enforce recycling – then huge fines are imposed by the EU which, under the localism Bill, are passed down to local authorities, for the Council Tax payers to find. So, Mr Pickles is not exactly offering us a gift horse ... more a Trojan Horse.

The man also wants those Councils which have gone on to fortnightly bin collection to revert to a weekly cycle, an idea that has met with immediate resistance from Councils, as there is no more money on offer.

Pickles would argue that the money could be found by reducing the number of "non jobs", except that he quietly skates over the inconvenient fact that so many of these – such as "climate change co-ordinator" arise directly or indirectly through central government policy.

Councils might also argue that, when it comes to "non-jobs", central government sets a very poor example, with its so-called "Twitter Tsar", and although "Cabinet office sources" argue that this is an unfair description, there is nothing fair to the taxpayer about the salary ... an eye-watering £142,000 plus benefits, pension and expenses.

The killer argument on fortnightly bin collection, though, is that it increases recycling rates, as householders find strategies to reduce overflowing bins. And that takes us back to where we came in – the need to please our EU overlords.

Pickles has a reputation for being a clever man – although that is not difficult for a Tory politician to gain – so he is unlikely to be unaware of the EU dimension. That means he is playing silly buggers for short-term electoral gain, in the expectation that no one will realise what he is doing.

In this, of course, he can rely on the media. Not one of the newspapers carrying the story has referred to the EU. The joy comes now and we pay the price later – and we will never be told.