Time is not on their side 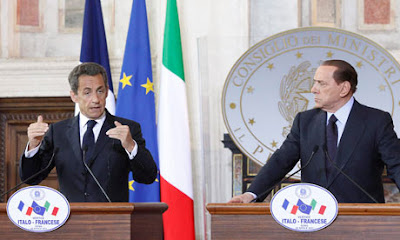 Not three weeks ago we were recording the mess the French and Italians had got themselves into over North African immigrants. But the situation took another lurch into the abyss yesterday when Italy and France jointly asked the EU Commission to have a look at the Schengen agreement. Berlusconi and Sarkozy want reforms which permit temporary cessation of rights to deal with "exceptional" situations like the flood of Tunisian immigrants.

"We want Schengen to survive, but to survive Schengen must be reformed", Sarkozy says. "We believe in free circulation but we believe in a state of law and a certain number of rules." Berlusconi said no one wanted to scrap the treaty but said "in exceptional circumstances we believe there must be variations".

So, like the good little Europeans that they are – when it suits them – they have dumped the problem in the lap of the Commission. What it might come up with has not yet been revealed but there is talk of demands for fully-enforced deportation agreements with African countries, enabling asylum seekers and illegal immigrants to be returned.

Such ideas have not been easy to enforce in the past, and so to introduce new rules now would require a whole raft of treaties to be unstitched. There is not going to be an easy or even rapid resolution. But, with the Libyan situation deteriorating, time is not on their side. The Commission is going to be hard put to come up with an acceptable deal.