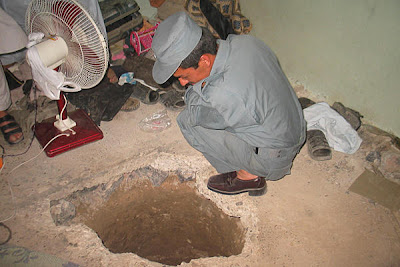 Now that we are seeing the photographs of the tunnel (above), supposedly used to afford the escape of nearly 500 Taliban prisoners, it is getting a little bit difficult to believe in the story we are being told. The sheer practicalities of passing that many people through in the time claimed stretches belief to its limits and beyond.

One suspects now that the tunnel could have been for show, and the bulk of the escapees walked out of the front door. But, by whatever route they secured their freedom, the Christian Science Monitor puts its finger on it. It cites Ahmad Shah Khan Achakzai, a former member of parliament in Kandahar, who says: "It is impossible for the Taliban to get 500 men out of prison without anyone's help. I believe there are some people from the prison or the government who gave the Taliban support … It's now clear to everyone how corrupt the government is".

Given that the whole coalition policy - upon which we rely in order to disengage – is progressively to hand over power to the Afghan government, that rather drives a cart and horse through our plans. And that alone should drive the issue to the top of the front pages and kept it there, while we explore the implications of this development.

However, this news is sliding rapidly down the running order, barely visible in The Daily Telegraph, with relatively neutral reports about "inside help". There is no discussion of the implications for the UK and the withdrawal of our troops, and there is no comments section to the online story.

This, therefore, is turning out to be a perfect example of that poorly understood phenomena known as "agenda setting". We are seeing the downside aspect. The news is of such importance that it cannot be ignored. But it is not one where discussion is encouraged, so it not given any profile. The last thing the media wants is a debate on whether Mr Cameron's plans to pull troops out by 2015 are moonshine.

By contrast, you can see precisely where "engagement" and discussion is encouraged. Attention is being channelled to the "sleb" aspect of super-injunctions, with hand waver Andrew Marred admitting to his sins. The issue of real importance is this respect is the gagging orders imposed at the behest of social services, to conceal the "stolen kids" scandal. But that is "off-agenda", so the meeja passes it by, and distracts us with another sleb soap opera.

The same can be said of the Bristol riot. The substantive issue is a more than usually incompetent police force. But such hard-edged issues are not on the agenda. The meeja is uncomfortable with that idea ... that the police actually caused the riot. So readers are distracted by being invited to share their concerns about supermarkets. Tesco, rather than police incompetence, thus becomes the agenda item.

So it is that the media is far more than an instrument for delivering information, to the extent that we could even assert that such a pedestrian occupation is not even one of their aims. Essentially, the far more important role is to define the agenda, telling their readers what to think. As importantly, this is about steering them away from off-agenda topics that, in their considered view, should be left alone.

If this appears to be veering into conspiracy theory territory, that isn't necessarily our destination. One very common reason why the media sets the agenda is simply because it can. Editors and proprietors take their enjoyment and their sense of achievement from this. It is the exercise of power for the sake of it. You occasionally hear on the BBC Radio 4 Today programme boasts about setting the agenda – it is the "professional" challenge.

Another reason stems from the same wellspring. All media people – as do we all – have a "world view". Their mission in life is to share, so it is unsurprising that they will tend to push us in the direction of that which they think is important, and play down material which does not interest them. And, in a feminised, corporate, left-wing industry, it is unsurprising that the media promotes a feminised, corporate, left-wing view. This is done automatically, without thinking ... which is just as well because so few journalists can actually think.

There are many other reasons - which perhaps we can explore over time. But the main point is that to concede agenda-setting to the media is to concede power. From that stems another crucial point. Although we are schooled to take the lead from the media, we do not have to accept their agenda, their emphasis, their corralling and their constraints. With equal access to the raw material – the actual news – the technology gives us the ability to define our own.

In other words, we no longer have to buy their definitions of what is topical or important. We can pursue our own agenda, defining for ourselves those issues which we believe are important. And in so doing, we make a statement, one that will eventually percolate to the politicians who are still largely slaves to the MSM. But we also weaken them. Those who set the agenda hold the power. We do not need to give them that power.