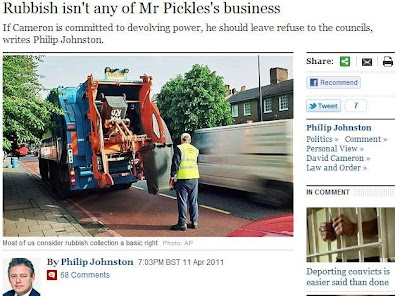 "And so it remained until a few years ago, when Labour told councils that they could, if they wished, remove rubbish every fortnight, ostensibly as part of a drive to meet EU recycling targets. This provoked such an outcry that the Coalition government scrapped the targets and told councils to restore weekly collections".

This is Philip Johnston writing in The Daily Failygraph about refuse collection. He is the man who once famously declared that he didn't want to refer to the EU too often in case he appeared "obsessive" to his colleagues. And so it is that in a 900-word piece about waste, he mentions the EU once, where legislation on disposal is an exclusive EU competence and thus drives the collection arrangements.

Johnson's thesis is about the "logic of localism", where he argues that local councillors should be allowed raise the money for their own refuse service and run it as they see fit on the basis of a manifesto put before the electorate. They should will the means – including, if necessary, wholesale privatisation – and they should take the rap if it all goes wrong.

Greater local decision-making must go hand in hand with proper lines of accountability, otherwise it is meaningless guff, says Johnson. Voters need to be clear where responsibility lies, because when a council stubbornly refuses to do what most local taxpayers want it to do, the remedy is in their hands: kick it out of office.

But, of course, what makes Johnson's argument particularly absurd is that he ignores the fact that the management of the refuse service (and therefore its costs) are dominated by EU law. Councillors are not allowed to "run it as they see fit" as they are bound by the directives handed down by our supreme government, and they thus act accordingly.

Therefore, what the voters want – and what they vote for is an irrelevance. The first concern of the Councillors is to meet the demands of their real masters, the government of the European Union.

Now, the point about Johnson is that he knows all this. But he doesn't want to appear "obsessive", so like his colleagues on the motoring desk, he deliberately leaves out key information, which completely distorts his writing.

You shall not be allowed to know that the EU is your supreme government that touches every aspect of your life. You shall be kept entertained by the cosy little notion that the government in Whitehall decides on things like MoT tests and local councils decide on things like refuse collection, and that our Naval operation off Somalia is run by the Admiralty.

That is the paradigm with which the babies in the Failygraph - and most of the media – are comfortable. And because they can't handle the truth, you are not allowed to know it. And the natural and obvious conclusion to draw from this is that if you want to be routinely and quite deliberately misinformed, buy a newspaper.