Doesn't that make you feel proud? 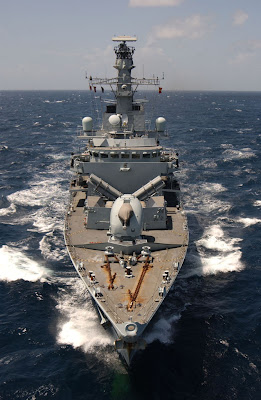 On 9 April, the Royal Navy frigate HMS RICHMOND finished as an EU NAVFOR warship after 75 days proudly flying the European Flag. She has been hugely successful in all of her assigned tasks and has shown a proactive attitude to face all challenges in order to achieve the objectives of EU NAVFOR.

During her days at sea, HMS RICHMOND has spent a good deal of her time protecting the Internationally Recommended Transit Corridor (IRTC) in the Gulf of Aden and escorted two World Food Programme vessels as they deliver much needed humanitarian aid to the displaced people of Somalia.

To mark the end of her mission, the Spanish Force Commander Rear Admiral Juan Rodriguez visited the ship and had the opportunity to lunch with the Commanding Officer and the crew. He commended the warships efforts during her time with the EU Task Force.

"You showed your commitment with a very high rate of days at sea and excellent statistics in terms of MSA (Maritime Situational Awareness) approaches. You made the presence of HMS RICHMOND felt and contributed much to deterring piracy in the Gulf Of Aden".