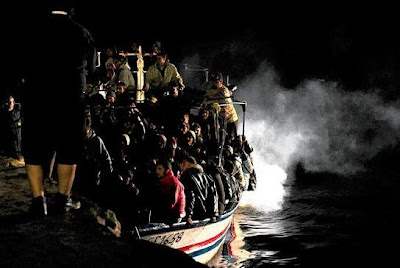 Perhaps I have been a little unfair to France, or had under-estimated the degree to which patience is running out over immigration.

We thus learn from Wall Street Journal that the very essence of the European Union experience – the open borders – is crumbling before our very eyes. The French police have re-opened a formerly abandoned checkpoint along the country's Mediterranean border with Italy, a a couple of miles from the beach town of Ventimiglia.

Strangely – or perhaps not – this is getting more coverage in the US press than it is over here, so we also get a report in The New York Times.

This and the WSJ tell of the nearby French town of Menton, where French police in riot gear are boarding trains crossing into France, grilling passengers. Other police forces are monitoring roads and foot trails that lead into French territory from Italy.

The WSJ says this operation is part of France's attempt to stop the wave of North African migrants who regard Italy as a "way station" as they travel by boat, train and foot toward jobs and family in French cities. More than 700 migrants who have crossed into French territory via Italy have been detained by French police and escorted back.

Needless to say, the "colleagues" are getting more than a little uptight about this. EU Home Affairs Commissioner Cecilia Malmstrom is back in the hot seat, suggested that France is in breach of the "free movement" provisions. She wants it both ways does that lady, having told the Italians that giving resident permits to the immigrants did not allow them to travel.

But, says Malmstrom, when asked about France's crackdown, "There are no borders so they can't". "You are not allowed to do checks at the border" unless "there is a serious threat to public security, and for the moment that is not the case".

However, France's foreign ministry – with an eye to the elections where a weak Sarkozy is up against Mme Le Pen and some very pissed-off Kermits - says Paris is enforcing a bilateral accord with Italy. This is the so-called Chambery agreement, where France can return any undocumented migrants to Italy for expulsion if French officials can ample evidence they came from Italy. 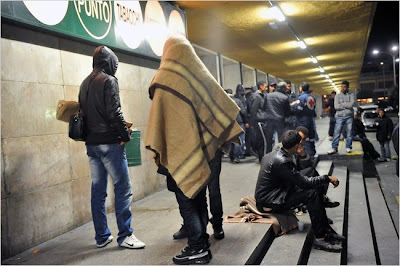 "Bilateral", under the circumstances, though, has become unilateral, as the Italian police, no doubt under orders from Rome, are waving the immigrants thorough, and not showing any willingness to co-operate with their Kermit counterparts.

"There's a hostile attitude coming from Paris," Italian Interior Minister Roberto Maroni told the Italian Senate on Thursday. Kermit Interior Minister Claude Guéant "lashed back", saying France "is completely within its rights to send these people back to Italy."

With Wops and Kermits at daggers-drawn, it's just like old times, and with the Portuguese economy going belly-up – to add to the many others in the resuscitation room – they must be tearing their hair out in Brussels.

Nevertheless, the Kermits are unrepentant. With cars piled up on the Italian side of the border, the police are doing what they enjoy doing the world over – pissing people off, this time by laboriously checking every car as it goes through. With detailed checks on the trains as well, EU rules are flying out the window.

Moreover, this seems to have been going on, under the radar, for a little time. Yassine Fatnassi, a 28-year-old "construction worker", was one, with three others, taken off a train from Italy to France and detained by the Kermits at a train station in Nice - on 31 March.

Fatnassi said police took him to a barracks near the French-border town of Breil, telling him he would be sent back to Tunisia. Fatnassi said French police dismissed his requests for a lawyer. He said he was then placed alone in a small holding cell for 24 hours without food or a place to sleep.

On April 1, Mr. Fatnassi said, French police loaded him into a patrol car and drove him to the border and threw him out of France. And quelle horreur, the Kermits didn't seek approval from Italian authorities to dump their trash on the doorstep.

In a measure of the problem, Fatnassi, who has two brothers awaiting him in Paris, says he is "undeterred" by the experience. "It was scary, but I must go to France, because that's where my family is," he says.

Ahmed Mhimdan, a 28-year-old Moroccan and another so-called "construction worker" who says he routinely crosses the border for jobs. He was on his way by train to meet friends in Monte Carlo when two French police boarded his train coach and scrutinised his working papers, which were in order. "The French don't mess around," he said.

Predictably, migrants are now avoiding cross-border the trains. Tunisian fisherman Hassen Kaoubi, 35, has attempted four unsuccessful crossings. His last, which took him on a miles-long foot trail through craggy terrain ended with French police picking him in the countryside just outside Nice. As is now standard practice, they dumped him back in Ventimiglia.

The people of Ventimiglia, who no more want this trash than do the Kermits, are in an invidious position. But instead of focusing their wrath on Rome – which should be sending its ferries back to Tunisia instead of bringing the migrants to the Italian mainland – they are having a go at the Kermits.

Last Saturday, hundreds of protesters gathered near the train station waving signs accusing France of thumbing its nose at its former colony. "Tunisia was once French!" read one sign.

Well, Libya was once Italian, for what good that did them. And when their dross comes storming over the Mediterranean, arguing that point isn't going to do them a lot of good. And nor is Brussels going to get much traction. Open borders is very nice in theory, but the price ordinary people have to pay is proving to be far too high.

As for the British media, one wonders why they are not covering this issue. Perhaps it is just too dangerous, giving people quaint ideas, like we don't have to let the garbage in – much less give it benefits. We can turn it right round and send it back from whence it came. And there's bugger-all Brussels can do about it.