Rioters in Bristol have caused severe damage to a Tesco convenience store, following a botched operation, in which police now claim they were acting to prevent a petrol bombing of the store.

Despite a local witness writing that the trouble was sparked by a heavy-handed police action following an  operation to evict a long-term squat, Avon and Somerset Constabulary are spinning like mad. Supt Ian Wylie claims: "There have been several significant incidents in this building during the past few days, which have caused serious concerns to police and local residents".

The massive police operation started around 9pm in the Bristol Stokes Croft area. Officers in riot gear and full length shields - many of them from out of town - backed up by horses, vans and the police helicopter, forced their way into the squat and evicted the occupants. The operation was very heavy-handed and no explanations were offered for the action. And despite this, it was still relatively quiet in the area by around 10pm.

Wylie, who obviously isn't very, drools out more officialese, telling us: "The safety of the public is paramount in a situation of this kind and we took the decision to carry out a robust and swift operation, following intelligence received about the criminal intentions of those who were occupying the building".

He then goes on to say: "Following the operation, it is unfortunate a small minority gathered and began attacking officers with bottles and other items". The propaganda BS continues, and watchable on video.

What triggered the riot, however, was police with riot shields blocking off a major local junction, preventing residents getting to their own homes. A large crowd gathered, with the police facing off local people. After more than an hour of this provocative and aggressive action, elements of the crowd finally reacted and started throwing stones and bottles. A witness stated that it was almost as though the police, many of them from Wales, were looking for trouble.

By 2 am the police had achieved their apparent aim, assuming that they had any, by uniting the entire community of the area against them.

Contrary to Wylie's report, and other police claims. the BBC report makes it clear it wasn't a "small minority". It was nearly 300 people, says The Guardian. Having provoked universal hostility, the police were forced to retreat. The Tesco store - the very one the police operation had supposedly been set up to protect - had its front trashed. A police car was badly damaged.

Whatever the rights and wrongs of this, Mr Plod is telling lies. He is also stupid enough to think we will be taken in by them. But there is now such a thing as YouTube, multiple independent photo-albums, such as here and here, and a large number of independent reports, allowing us to see what has been going on and form our own opinion. From an independent blogger, we get this quote:


I was dismayed by the council and police reaction to a sustained peaceful protest that has existed against Tesco for over two years. Until this week Stokes Croft was the last remaining major high street in the West of England inhabited exclusively by independent establishments. Tesco moved in despite universal local disapproval in an area already surrounded by dozens of Tesco stores. Despite the palpable disquiet protests have been entirely peaceful. This was not a volatile situation until police moved in to the area in full riot dress with no explanation for kettling Stokes Croft except "health and safety" and "something to do with Tescos".

As police entered "Telepathic Heights" rumour spread that more raids on houses were intended. As this was not an unlikely story due to recent dawn raids on protesters houses and confiscation of computers and books over the last (xmas) exam period the community barricaded the remaining entrances to Stokes Croft and the police responded by charging the barricades, apparently for no other reason than for a fight. This action alone provoked violence from the famously diverse, educated, peaceful, loving and pacifist community of Stokes Croft.

It is very easy to come on, po-faced and say there is no excuse for violence. But, in fact, when the plod have lost it, and are quite obviously lying through their teeth – and we know this is the case in too many situations - then violence is an eminently reasonable response.

This is what the politicians and the plods are going to have to learn. They have been taking the mick for so long that people just don't give a damn any more. Where you would have once seen concern and anger about disorder, you will now seen amusement at the discomfort of the authorities, and only marginally concealed sympathy for the rioters. 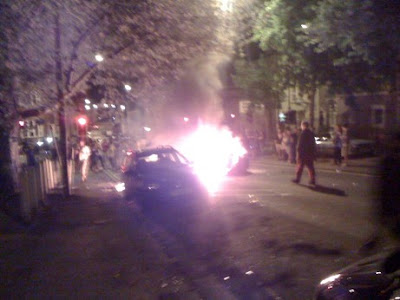 However, the Stokes Croft is an area infested with a high proportion of pseudo-Marxist "eco hippies" and anarcho-hippies, not the sort of people we would not naturally support. But the authorities seem to have inflamed the situation - intentionally or otherwise, it is difficult to ascertain - giving planning permission to a Tesco shop bang in the centre of the area. A vocal element of the community have quite clearly expressed their opposition, although the real locals, as opposed to the eco-Nazis, are probably quite in favour. 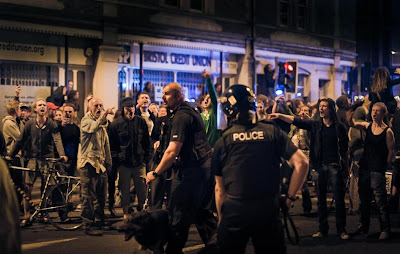 On top of the eco-warriors, backing onto the area is St Pauls, known for its social deprivation and high unemployment, where "social mobility" is a skate board. It is well endowed with nihilist scrotes who are always ready and willing to trash the occasional plod-mobile, alongside pampered, middle-class students, who seem happy to join in the fun.

But there seems to have been some anticipation here, and a quite deliberate confrontational approach. The plods have been largely caught out, not helped out by their lack of intelligence. Having drafted in Welsh police for their pre-planned operation, they were not bright enough to realise that their behaviour might provoke a hostile response. Its all the fault of those nasty people who didn't disperse when we asked them to, says Wylie - nothing to do with the cack-handed and aggressive tactics of the police. 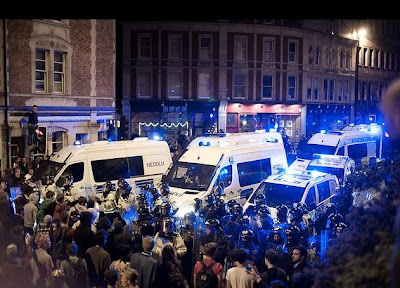 The interesting thing is that we don't have a dog in this race, especially as the bleeding-heart Guardianistas are also doing their own spinning. Who cares wins? The best outcome, it seems, would be elements in the locality, their Guardian supporters, and the police thugs beating each other senseless. However, a lot of quite innocent people seem to have been caught in the police action, and suffered needlessly.

As for the eco-mob faction, many of their members have been afloat on a raft of public money. Furthermore, up to press, the council turned a blind eye to what has become "squat central", a lawless ghetto for anarchists and benefits farmers, especially after the area has been blighted by development falures. Now the money is beginning to run out, the eco-mob is getting arsey. One weeps for the poor dears, as they take it out on over-paid public "servants". 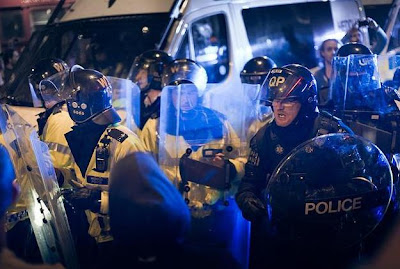 Either way, though, this has only started. The real lesson for the plods and pols is that, for all their armoured cars, and their big brave men (and goils) with their riot shields and body armour, there are more of us than there are of them ... a lot more. Politicians are known for their strange alliances of opposites. Similar sorts of alliances in real life are possible, when there is a common enemy - and the politicians and police are "it", especially if - as seems to be the case - they are going out of their way to be provocative, and thereby uniting disparate elements within communities.

The sooner the establishment starts paying attention to that singular fact, the easier it is going to be for them. In the final analysis, while they can cause a lot of grief and hardship, they cannot prevail.