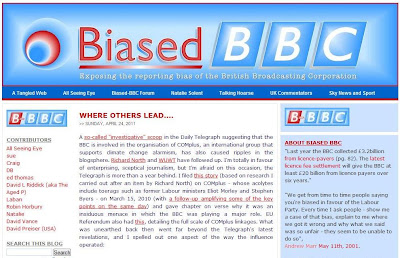 On top of our comments on The Sunday Telegraph piece, Biased BBC has waded into the debate:


I don't want to be churlish, and I am pleased that the Telegraph is finally looking at the rat's nest of establishment money-down-the-drain activity that supports climate change hysteria. But if investigative ace Jason Lewis properly read blogs such as EU Referendum and B-BBC, he'd truly be ahead of the pack. The real scandal here is that the BBC is not only involved in COMplus, but also directly part of a huge related network of climate change activism.

I've taken a little flak for my own comments – which is fair enough – but I do believe there are underlying issues here, so humour me. I've added a comment to the Telegraph site, endorsing Biased BBC, and noting the following:


The activity of the Sunday Telegraph is to be welcomed, but as B-BBC points out, if instead of reinventing the wheel and pretending it owed it, Mr Lewis had looked at the other work, he could have taken the story on further, instead of just offering a weak rehash of the salient issues.

This "dog-in-the-manger" attitude of The Sunday Telegraph typifies the attitude of the MSM to the alternative media. They are happy for us to link to them, and benefit hugely from the enhanced hit-rate they gain as a result, and they are happy to steal our work. But then to pretend that we do not exist is not only offensive, but stupid.

This is not a zero-sum game. The infosphere is effectively unlimited, but by trying to colonise a tiny corner of it and pretend it is all yours is to cut yourself off and restrict your own opportunities to expand. It is for this reason, probably more than anything, that the MSM is a failing industry. It does not understand the net, and will not listen to the people who do.

The physical and emotional investment we have in the blog is evident for anyone who reads it. I feel passionately about the role of the media and the "new media" in the functioning of democracy, and am convinced that the MSM is no longer pulling its weight.

What the media does (or does not do) is still important. For instance, if the police continue to go off the rails, it will not be the politicians that come to our rescue, but the media – so garbage like this is actually quite worrying.

Hence, when the media is not performing, I believe it is a valid and necessary function of a blog such as ours to point it out. We have enough problems without adding to our list, but if the media continues on its death spiral, we all lose. It may be beyond saving, but it is worth a little effort.

COMMENT: HAIL THE MSM THREAD
Posted by Richard at 00:50