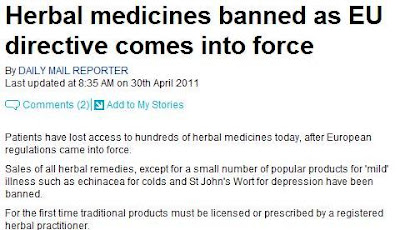 Marking our slow but inexorable transition from a free society, we have today the EU's herbal medicines directive coming into force. This is a measure that has been going through the system for ages. It has absolutely no legitimacy and exists only to reinforce the grip of big pharma on the market, excluding a small but important sector of competition – and choice.

I suppose it is significant that today is also the anniversary of Hitler's death (yesterday was the anniversary of his marriage to Eva Braun), marking the final stage of the long process of breaking free from the grip of the Nazi regime which had terrorised Europe.

And while no-one sensible would begin to suggest that we are in any way seeing the dark clouds of a new totalitarian state descend over Europe, it is germane to note the aspirations of a new enlightenment - Churchill's "sunlit uplands" – are eroded daily, as the combination of EU and domestic bureaucracy extends its grip.

We cannot say we are less free than we were in 1945. Britain then was, effectively, in the grip of a dictatorship – with laws more draconian in some ways than ever the Nazis imposed – and it was a long time before the process of liberalisation got under way.

Arguably, it was very far from complete before it was reversed, by our own bureaucrats and then by the torrent of laws coming from the "Common Market", that was to become our supreme government, the European Union.

In 1945, however, we were "free" in the sense that we were self-governing, albeit that we were so broke that the IMF called the shots before very long. But now we are broke again, and not free. We are no longer a self-governing nation. We see it in small things – many products we took for granted, we can no longer buy. Today, that list got longer.

So, this is another grand day for us to celebrate, another in the long march towards the loss of our freedoms that our parents and grandparents fought to preserve. We can wave our Chinese-made plastic flags, but the freedom and the aspirations that they represent have long gone.