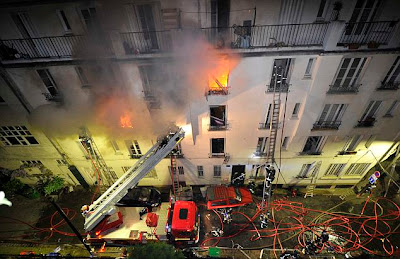 Five people have died and almost 60, including young children, were injured after a fire ripped through a block of flats in Paris yesterday, according to The Daily Mail. Four of the dead had jumped from high windows to escape the blaze, while one was burnt alive. Six others were in a life-threatening condition. Fire service spokesman Frederic Grosjean said all are believed to have been "surprised in their sleep without any warning".

The blaze in Menilmontant, a densely populated area of the 20th arrondissement, is the latest in a long list which have blighted the French capital's public safety record. Scores of mainly immigrants have died in similar circumstances over the past decade, with the authorities apparently unable to do anything about the scandal. The apartments in Menilmontant did not have fire escapes, or even smoke alarms, and many of those killed became trapped in the tightly packed stairwell where the fire broke out soon after 3am.

This incident  is of some interest at several levels. Firstly, this is an immigrant area and it underlines the French tendency to herd their "guests" into ghettos, crowded in unsafe and insanitary accommodation. I do, however, have a special interest here, as in a former career working for a London Borough, I carried out fire protection enforcement in houses in multiple occupation (HMOs).

We worked to a then GLC code (before it was abolished), implementing a cheap, standard scheme which gave half-hour fire protection, with protected "means of escape". There was a big fire in an HMO on our patch, and afterwards we were all taken to see it – because everybody had got out. It worked, and we had the greatest confidence in the scheme (which, incidentally, used copious quantities of white asbestos sheeting).

I don't know what standards are like now – I've lost touch. Although when sprog junior wanted to move out to his first flat, I inspected the attic flat he wanted to rent. And it didn't even have basic fire resistance, and no means of escape. I wouldn't let him rent it. As a campaigner against excessive regulation, I have nevertheless always accepted the need for well designed, properly implemented and adequately enforced regulation where lives can be saved. And I always thought our particular fire code was an example of that.

It has always thus struck me as a test of a civilised and humane society, that it can develop such systems. On those grounds, France fails the test. But, when you see the waste of effort these days, enforcing ridiculous rules and regulations, while the basics are ignored, I am not so very sure that the UK will continue to do so much better.

Regulation and enforcement has always been a matter of priorities, and we now seem to be a society which has the greatest difficulty working out the right priorities. But the one thing of which I am very certain is that, however bad we get, we are in absolutely no need of any guidance from the Kermits – as this incident illustrates only too well.

It is a sobering thought, therefore, that the French Government, through the modern miracle of the EU, has just as much say in the formulation of much of our regulatory code as our own provincial government. I remain to be convinced that we are better off for it.