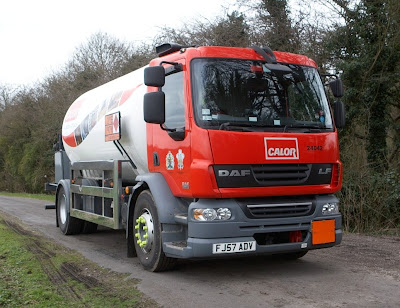 This Booker column story is almost a throwback to the "good old days" when Booker and I were doing "red tap folly" stories and other such delights. Booker describes it as the "perfect little vignette" of the benefits we derive from our EU government, where Calor, our largest supplier of liquefied petroleum gas (LPG), have been dumped on by the EU by a particularly mad regulation.

Recently, Booker tells us, the firm spent millions of pounds on a new fleet of state-of-the-art, British-built tankers, so much more efficient than those they replaced that the firm now needs ten percent fewer vehicles.

On 1 July, however, a new regulations come into force, known as The Carriage of Dangerous Goods and Use of Transportable Pressure Equipment Regulations 2009, based on an EU Directive laying down Europe-wide standards for "transportable pressure equipment" (TPED). This means that Calor will gradually have to replace its new tankers with ones that are heavier, more cumbersome and carry less gas, costing them an extra £3 million a year.

The new requirements for thicker-shelled tankers might make sense in the hot countries of southern Europe, where the temperature may necessitate extra protection. But as our Department for Transport has accepted, there is no need for them in Britain, the only country where Calor's tankers are allowed to operate.

However, when the directive was approved at a meeting of the Council of Ministers, the only British representative present was one of our permanent officials in Brussels, who said that the UK supported it.

There is a story here, and one that is rarely told. The Directive was actually signed off in 1999, in the earlier stages of the Blair administration, and if ministers had kicked up enough fuss, doubtless they would have got an exemption, as there is no cross-border transport involved.

But that is not the way things happen. While it is possible to get "derogations", that requires getting the support of other member states, for which there is always a political price to pay. And the UK always prefers to husband its political capital for more important issues, although for what we are never told.

So it is that Paul Blacklock, Calor's director of strategy, then noticed that David Cameron had recently launched a "Red Tape Challenge", calling upon the public to identify "those unnecessary, frustrating regulations" that are "burdening businesses, hurting the economy and damaging society".

He wrote to Dave to point out that this regulation was a perfect example of what he was talking about. The new, less efficient tankers that his firm will be required to buy will simply add more vehicles to our congested roads, increase his drivers’ hours and fuel costs, emit more CO2 – for no benefit to anyone.

As the Red Tape Challenge website bluntly explains, however, "the UK government cannot scrap EU regulations", although it does go on to say that the Government does "recognise the burden they impose".

Indeed, they represent around four fifths of our total burden affecting business, a proportion that is rising all the time. Still, at least this makes clear – despite Cameron's fine words – that when our masters speak, there is nothing we can do but obey.