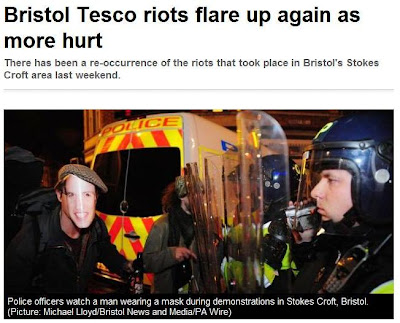 There was another outbreak of violence in Bristol last night as protesters gathered on Cheltenham Road to stand in peaceful protest against police action in last week's riots. Things turned violent around 1am, with a number of police and protesters being injured by missiles and close-quarters skirmishes, after people took exception to the tactics used by the police and the situation escalated.

Protestor Richard Ayres claimed that mounted police officers rushed down the middle of the street. "We were knocked to the side by them and were then shoved back by riot police with helmets, shields, truncheons and dogs", he said. "I remonstrated with them peacefully, flabbergasted at the sudden turn of events".

Assistant chief constable, however, Rod Hansen claims that officers had acted to stop protestors causing trouble. And therein lies your problem. With leaden, bureaucratic predictability, he declares: "I am satisfied that our tactics were appropriate and proportionate, and feel that the officers involved acted professionally and with great restraint given the threat and personal danger they faced". 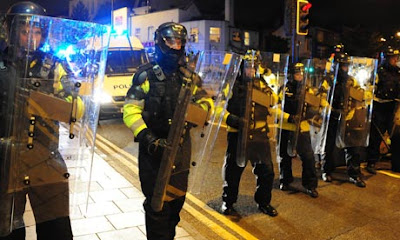 I am gradually compiling details of the riot last week, and have very substantially added to the detail already posted. The more one finds out, the more extraordinary an event it appears. Not least, there were far more than the 300 or so protesters claimed. At a very rough estimate, there must have been more than a thousand people on the streets.

What is very evident is that, despite the idiot media and their headlines, and those who are trying to jump on the bandwagon, this was not an anti-Tesco riot. It was an anti-police riot, reacting to the aggressive behaviour of the police and the arrogance, during the riot – which they provoked – and afterwards. This comes over in a Daily Mail report where a spokesman for Tesco says of the current incident: "Last night's violence in Stokes Croft and beyond underlined that this is not an anti-Tesco protest, our store is not even open".

Having behaved so badly last week, any sensible force commander would be acutely sensitive to the local mood. There seems to have been only the dimmest perception of that, by no means enough to have headed off this new demonstration, or any thought of changing tactics. And not recognising their own culpability, the police have not even begun to examine their own performance and thus fail to learn any lessons from it. 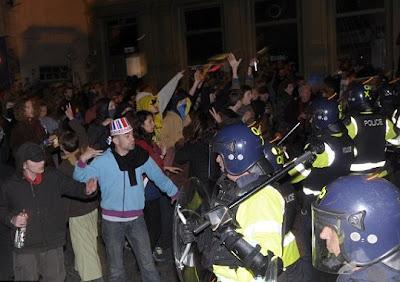 Putting police back on the streets, all tooled up with their riot gear on is just asking for trouble – it is insensitive to the point of stupidity, and demonstrates that the police have lost their instinct for consensual policing. They are now part of the problem and, each time they intervene, they do nothing but make the situation worse. 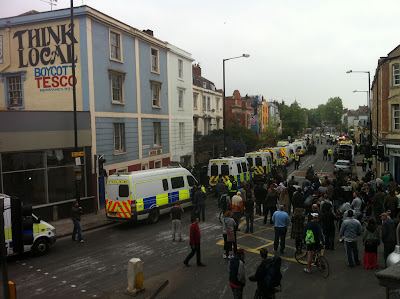 As if to prove the point, with all the sensitivity of an enraged bull elephant, the police were back again this morning, raiding the Telepathic Heights squat in a high profile operation involving about twenty vans and patrol cars, and a helicopter (picture above and below), with the riot gear out again. 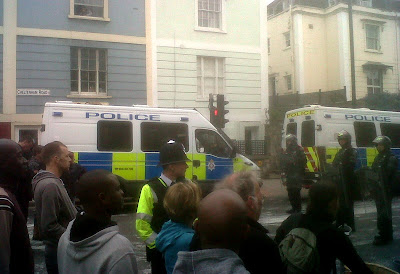 Thus, having managed to piss off the community, with aggressive, high-handed tactics, the police response is to repeat them. A police statement says: "The action has been taken as part of our aim to help the wider community return to peace and normality as quickly as possible following the disruption caused by the disorder, and also part of our commitment to identify and arrest those suspected of being involved in the recent disturbances".

These people are stupid beyond the meaning of the word. They have a "don't learn - can't learn" culture. Nothing good will come of it.