The very essence of the EU 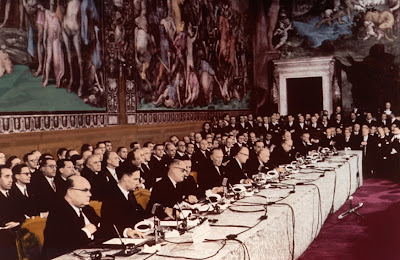 After the fall of France, even while the Nazis had united most of Europe with the bullet and the bomb, the Führer was thinking of making this permanent, with a "new order". He had in mind a "European economic system", which would "sweep away the customs barriers, quotas, currency restrictions, wastefulness and inefficiency of an anachronistic capitalist system".

At the time, the idea so worried British and free European politicians that, as early as July 1940, they felt impelled to come up with something similar. Theirs, however, would be a Europe "united by goodwill and in friendship, not by force and in terrors". It would be a Europe based upon some federal system. Armaments would be pooled and trade barriers broken down. Each nation would be allowed to conduct its own affairs in its own way with the same kind of freedom as each state in the American Union.

That, at least, was the theory. Then along came Monnet with his ideas of covert political integration, using economic integration as the Trojan Horse, the stealthy, salami-slicing of member state powers, building them into the Commission's portfolio in a process called engrenage.

And all those years later, we have the Wall Street Journal reminding us that the process still goes on. Yet, despite copious literature which identifies exactly the game the integrationalists are playing, it is still treated as a commercial or a "trade" issue. There is ignorance, and there is wilful ignorance. This is the latter.

Thus, with yet another power grab on its way, we are told in neutral terms that the European Commission has "endorsed new laws" designed to create more of a "single market" for companies selling goods and services in the European Union. The most significant is a European patent system that "would slash the price of registering an invention in the EU".

That, of course, is the carrot – the "stick" is increased EU powers, given the name "competences" to confuse the poor darling journalists. And so do they gush that the patent proposal is one of twelve "priorities" set by the Commission, the EU's "executive arm", as it seeks to extend the EU's mission of creating a true Continental market of 500 million consumers". With EU economic growth lagging behind that of Asia and the US, the Commission hopes members will approve the plans by the end of 2012.

The EU's mission, of course, is to create an all-powerful government of Europe, but the Wall Street Journal and the others doesn't want us to know that. Hence we see the continued use of the term "executive arm", instead of "supreme government". The latter might just give the game away.

For those who can crack the code, however, Jacques Pelkmans, a professor at the College of Europe in Bruges, does precisely that. The single market "is the very essence of the EU. It's a permanent project", he says. And while the big projects like common tariffs and passport-free travel have been accomplished, he said, it is always possible to break down more barriers.

The College of Europe is, of course, where they train the spawn of the tranzies to become the next generation of eurocrats – thoroughly and completely brained-washed to take their place in the "new order". So Pelkmans knows what he is talking about – and so do we ... political integration.

"Even in the U.S. or Switzerland, people can get irritated that the single market is not as single as you might want," Pelkmans says, adding a dose of camouflage, to avoid being too revealing. But he tells us that the list presented yesterday is the EU's most ambitious single-market plan in a decade. It includes mutual recognition of college degrees and other professional qualifications, a carbon tax, common rules for online shopping, and a common loan programme for small businesses.

All of this, presented as economic integration, means more political integration and more power to the Commission. But it will never be discussed in those terms, by business, the MSM and, especially, politicians like Euroslime Dave. They are in favour of this sort of thing and are in collective denial, pretending to themselves and everyone else that political integration isn't happening.

Thus does our independence continue to gurgle down the drain, sold for a mess of potage and a European patent system. And we are not allowed to know.