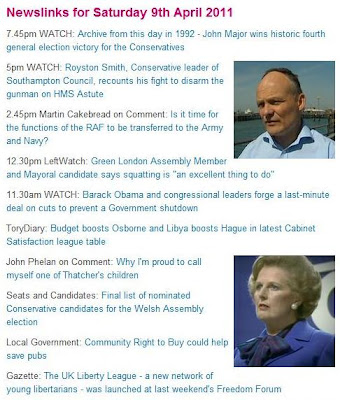 Picked up yesterday was this remarkable quote from the The Daily Telegraph, noting that: "If Tory members looked back at their 13 years in opposition they would, until recently, have comforted themselves with the thought that their party did at least become properly Eurosceptic during that wilderness period".

This is Tim Mongomerie, editor of the Conservative Home website, continuing his breakout into the MSM, offering what he evidently believes passes for intelligent political comment. One thing for sure, I remarked, there is no way of dealing with anyone in the grip of such a delusion. They are not of this world.

Coincidentally, Autonomous Mind is struck by the volume of anti-Cameron pieces in the media that are being trailed in the Newslinks section of the website.

"For a moment", says AM, "I had to check I wasn't on Labour List. But what is notable about these pieces is that the attacks are not ideological. They are not about policy. These have been spawned by the abject failure of leadership. And there is a lack of leadership because the leader, David Cameron, has no principle or clear political direction". He continues:

Rehearsing then the decay that is only too apparent in Government, AM comes to the conclusion that the only person responsible for this is the autocratic meglomaniac, David Cameron. "Devoid of conviction, belief or substance, he is not only continuing the decline of this country overseen by Labour, he is accelerating it under this insipid coalition of the self interested".

But here, we have to beg to differ – which we do rarely with AM. It is not Cameron, per se, who is the problem, but the people who put him in the position, despite the very obvious evidence that he was a wrong 'un from the start. And that, in the first instance, was the Conservative Party. So desperate were its members to win that they chose for their leader someone who, above all, they thought could win. They had absolutely no concern for what he might do, once he had "won".

To reconcile their choice with the reality, these tribal Tories then deluded themselves into thinking that Cameron was a Eurosceptic, despite the very good and growing evidence to the contrary - for not other reason than that is what they wanted him to be. And I particularly recall the aggression against anyone who dared say different - with Mr Montgomerie's website very much in the forefront. And the delusion continues, as Montgomerie still tries to convince himself, if no one else, that the Party had become Eurosceptic.

But the point about the Conservative Party is that it isn't anything, except tribal. AM condemns Cameron (rightly) for "pretending to hold their political convictions when he holds none", but that also describes the Conservative Party. It too is devoid of political convictions. It exists only to exist, and occasionally to win "power", even if it has to share it with another Party which, on the face of it, is its ideological enemy.

That this is the case is well-illustrated by the recent poll, on Tory leaders, which has the legend: "Budget boosts Osborne, Libya boosts Hague". How easily pleased the tribe is, fawning after an idiot who produces a lacklustre budget which does not even begin to address our financial problems, while applauding a fool for his ill-judged intervention in Libya, a man who is set for the title of the worst foreign secretary we have ever had.

And therein lies our main problem: Delusional Tories. They are the ones that got us into the EU (then Common Market), on a false bill of goods, because they had actually convinced themselves it was something it wasn't and never will be - a free trade area. Scratch a High Tory, and even to this day, they will tell you that free trade was the objective. He, like the Montgomeries of this world still, want to convince the world (and themselves) that they are Eurosceptic - and mightily offended they are when you do not sahre their fantasy.

But the long-standing delusion (and the aggression) is the result of their inability to cope with the fact that the default value for the Tories is Europhilia. The tribal Tory believes his party is Eurosceptic. And, to the tribe, belief is fact. Thus does the tribe survive, on a diet of fantasy. Now, when even the best of them can no longer sustain that belief without looking ridiculous, they still huddle together bleating their mantras. The tribe comes first, last and always.

Unsurprisingly, they cannot even begin to understand why so many of us - natural Conservatives all - hold them in such complete contempt, a group with as much political principle as a football fan club, and less sense. They are the Party of Cameron. Their tragedy is that they chose him. Our tragedy is that we didn't. They got what they deserved. We didn't.