The ring of servitude 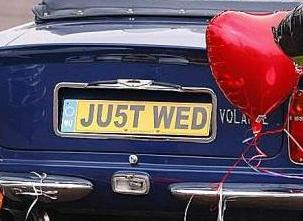 While the crowd in the Mall waved their plastic, printed-in-China flags, it is interesting to note that the royal weddlings acknowledged our real masters, flying their flag rather than that of the province in which they reside - on their illegal number plate. How interesting also that the "UK" under the ring was replaced by "♥U" ... was that addressed to the EU?

Iain Martin puts the tawdry ceremony in perspective. We have a supreme government which specialises in hollowing out the institutions of state, robbing them of power and meaning, but leaving the facade in place.

But, writes Martin, the most fervent Europhiles — such as Tony Blair — were very cunning. They realised that to make Britain more European they would have to dismantle steadily the traditional structures of government and erode this country's sense of its own distinctive institutions.

Yet so easily are we taken in by the fluff - and the ceremony without the deeper significance is fluff ... just theatre. But even though the mask slipped as the Mark of Cain embellished the royal plaything, the crowd still roared. They are being offered bread and circuses, while our nation is being stolen from us under our very eyes.

For the "colleagues" who watched yesterday's charade, they must feel it's as easy as stealing candy from babies, especially with our gushing media. You do wonder about those poor, lost souls though ... "royal couple with a common touch" says The Times, underneath its headline telling us that the weddlings have been "whisked away by helicopter". I mean to say, how boringly common is that?