The babies are out 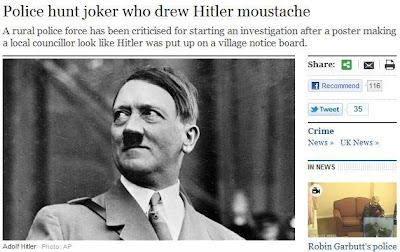 Fresh from their victory on the streets of Stokes Croft, it seems that Avon and Somerset Police have scored another triumph. Their quest this time was the villain who had drawn a comic Hitler moustache on an election poster for a Tory councillor and pinned it on the village notice board in the tiny Somerset village of Pitcombe, near Wincanton.

Police have stormed through the village carrying out house-to-house inquiries, knocking on the doors of all twenty houses in what has been labelled an operation of "quite stunning overkill". Strangely, even the wuzzies on The Daily Failygraph noticed something amiss, even though they seemed to find nothing particularly wrong with 160 officers under the command of the same force running amok on the streets of Stokes Croft.

The two incidents, in fact, tell you a great deal about the priorities of this once-great newspaper. To the actual "factual" reporting of the Bristol riot, it devoted 85 words, online. This was under the heading: "Bristol riots: 'Police not heavy-handed'", along with a video of the egregious Supt. Wylie. The "Pitcombe overkill" gets 501 words.

The babies have been let out of the nursery and are now running the newspaper.