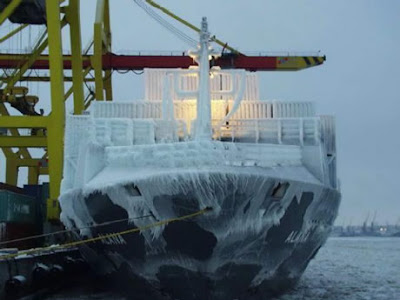 Although the newspapers are full of hyperbole about the very welcome spring warmth, the have been almost completely silent about the ice drama in the Gulf of Finland, as indeed they were about the Okhotsk Sea entertainment.

But the current weather here and the exceptional conditions in Eastern Europe and Russia are not unrelated. The very fact that it is warm here and St. Petersburg is suffering a late spring is that the same system which are bringing the mild weather to the UK is also packing the ice into the Gulf.

The situation at the end of last month had so deteriorated that fruit and vegetable shipments to Russia were hindered by dangerous ice, and cargoes of potatoes were being spoiled because it was too cold and they were freezing. 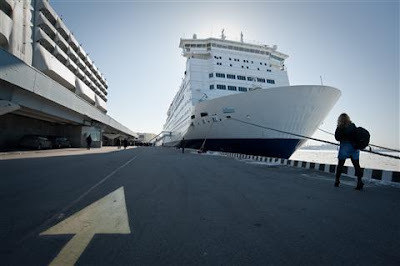 Even now, a week later and the Princess Anastasia ferry returned to St. Petersburg more than five hours late from its first trip to Stockholm (pictured above). The ferry was delayed due to thick ice that continues to cover the Gulf of Finland. Ten icebreakers, including a nuclear vessel, are still helping to free cargo vessels and passenger ferries.

According to data from the administration of the St. Petersburg seaport, as of Monday, 76 ships remained trapped in the ice – and it is not yet over. The ice means that the schedule of the Princess Anastasia is subject to change. According to ferry staff, the journey to Stockholm could take up to 35 hours instead of the scheduled 23 hours.

And this is not just idle interest. The parochialism of the British media is such that those who rely on it are never given the big picture. The focus on a brief period of warm spring in Britain allows the myth of global warming to be sustained, whereas as the global temperatures is creeping down, and hot spots here and there can always be matched by cold spots elsewhere (and vice versa).

This distorted picture is a real problem when it comes to public perception. Memories are short, and when the global warmists come out to play, the fine weather undoubtedly influences sentiment. Yet there is rarely any serious attempt to counter their propaganda. Ice-bound in St. Petersburg doesn't cut it - but it should.