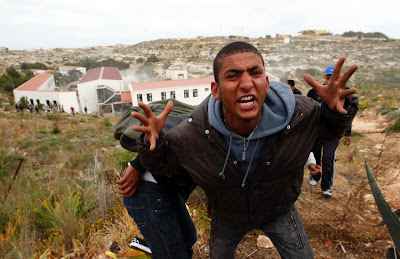 Following on from the mainly US coverage of the closure of the border between France and Italy, over the influx of Tunisian immigrants, the row has now spread to Germany, with the Federal Republic also threatening to reinstate border checks "against the interests" of the EU's free movement zone in an escalating row with Italy over Tunisian refugees.

According to our Bruno, with 23,000 immigrants already counted, Franco Frattini, the Italian foreign minister, is pouring fuel on the fire, saying: "Thousands, tens of thousands, maybe hundreds of thousands of migrants could come from Tunisia. It's a purely European affair," as he demands EU solidarity.

Spiegel has, predictably, picked up the story, recording that the immigrants themselves have been doing their own bit of fire-raising, rioting over a bilateral agreement between Italy and Tunisia to send back those who arrived after 5 April (pictured above).

In Germany, the issue has touched off a "mini-political firestorm", with the Interior Minister Hans-Peter Friedrich warning against sending a signal to North Africa that the borders in Europe were open. Meanwhile, the interior minister of the state of Lower Saxony called for European sanctions against the Italian government if it did not give in on the immigration issue.

Friedrich, a member of the conservative Christian Social Union (CSU), the sister party to Chancellor Angela Merkel's Christian Democratic Union (CDU), told a German television program Monday that it was Italy's problem to handle. "Italy is a large country," he said. "Twenty-three-thousand refugees in relation to the country's entire population is no problem."

He did not say that Germany was an even bigger country, but then that's European solidarity. What are fair-weather friends for?

Anyhow, Italy seems to be sticking to its promised to give over 20,000 Tunisian refugees temporary visas allowing them to travel freely in the border-free Schengen zone, but during "bad-tempered European talks" in Luxembourg on Monday, Germany warned Italy that it will not accept the migrants and that Berlin will tear up the EU's border-free travel arrangements to stop them.

Waiting in the wings is Maria Fekter, Austria's interior minister, who has added her view, saying: "Letting these people in would only pave the way for crime, and as minister in charge of security I cannot accept that". Joachim Herrmann, the interior minister for Bavaria, warned he would stop the refugees by using regional powers to reintroduce border controls on the German-Austrian border.

"We will not accept that the Italian government simply declares that the Tunisian migrants are tourists and uses this to push them into other countries," he told the Welt am Sonntag newspaper. "They must be sent back to their homelands".

Reuters meanwhile reports that Italian Interior Minister Roberto Maroni, in that Luxembourg meeting with his EU counterparts, said: "Italy has been left alone. I wonder whether in this situation it makes sense to remain in the European Union".

Good question that ... we have been known, under slightly different circumstances, to ask it ourselves.