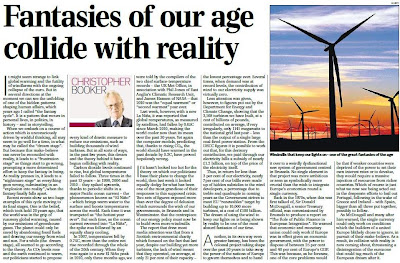 The analyses which brought us this book on storytelling are today employed by Booker in his column, where he links global warming and the futility of wind farms with the ongoing collapse of the euro.

In several directions at the moment, he asserts, we can see the unfolding of one of the hidden patterns shaping human affairs, which years ago (in his book) he called "the fantasy cycle". It is a pattern that recurs in personal lives, in politics, in history – and in storytelling. Thus he tells us:


When we embark on a course of action which is unconsciously driven by wishful thinking, all may seem to go well for a time, in what may be called the "dream stage". But because this make-believe can never be reconciled with reality, it leads to a "frustration stage" as things start to go wrong, prompting a more determined effort to keep the fantasy in being. As reality presses in, it leads to a "nightmare stage" as everything goes wrong, culminating in an "explosion into reality", when the fantasy finally falls apart.

From that platform, Booker then goes on to evaluate the ramshackle state of the global warming argument, with reported that global temperatures, as measured by satellites, having fallen by 0.65°C since March 2010, making the world cooler now than its mean over the past 30 years. Yet again the computer models, predicting that, thanks to rising CO2, the world should have warmed in the past decade by 0.3°C, have proved hopelessly wrong.

But, if it hasn't looked too hot for the theory on which our politicians base their plans to change the world, adds Booker, then last week it looked equally dodgy for what has been one of the most grandiose of their responses to this supposed crisis. Two sets of figures exposed more than ever the degree of delusion which surrounds the wish of our governments, in Brussels and in Westminster, that the centrepiece of our energy policy must now be to build even more windmills.

The report that drew most media attention was that from a Scottish environmental charity which focused on the fact that last year, despite our building yet more turbines, the lack of wind meant that they operated, on average, at only 21 percent of their capacity – the lowest percentage ever. Several times, when demand was at record levels, the contribution of wind to our electricity supply was virtually zero.

Less attention was given, however, to figures put out by the Department for Energy and Climate Change, showing that the 3,168 turbines we have built, at a cost of billions of pounds, contributed on average, if very irregularly, only 1,141 megawatts to the national grid last year – less than the output of a single large coal-fired power station. From the DECC figures it is possible to work out that, for this derisory contribution, we paid through our electricity bills a subsidy of nearly £1.2 billion, on top of the price of the electricity itself.

Thus, in return for less than three percent of our electricity, nearly seven per ent of our billls were made up of hidden subsidies to the wind developers, a percentage due to treble and quadruple in coming years as the Government strives to meet EU "renewables" target by building up to 10,000 more turbines, at a cost of £100 billion. The dream of using the wind to keep our lights on is being shown by reality to be one of the most absurd fantasies of our time.

Booker then moves on to what he argues is, in its own way, an even greater fantasy. This is that colossal project taking shape over the past 50 years to take away the power of the nations of Europe to govern themselves and to hand it over to a weirdly dysfunctional new system of government centred in Brussels. No single element in that project was more ambitious or seen as symbolically more crucial than the wish to integrate Europe's economies around a single currency. 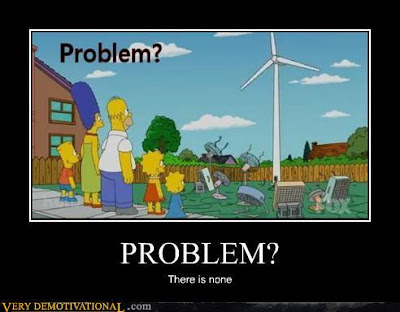 Back in the 1970s, when this was first talked of, Sir Donald McDougall, a senior Treasury official, was commissioned by Brussels to produce a report on "The Role of Public Finance in European Integration". He warned that economic and monetary union could only work if Europe was in effect given an economic government, with the power to dispose of between 25 and 40 percent of Europe's GDP.

This was because, as he foresaw, one of the core problems would be that if weaker countries were deprived of the power to set their own interest rates or to devalue, they would require a massive injection of resources from richer countries. Which, of course, is just what we now see being acted out in the desperate efforts to bail out Portugal, following in the wake of Greece and Ireland – with Spain, bigger than all three put together, possibly to follow.

As McDougall and many after him warned, the single currency could only work on conditions which the builders of a united Europe blithely chose to ignore, in pursuit of their make-believe. As a result, its collision with reality is now coming about, threatening a disintegration of the eurozone that could tug much of the European dream after it.

Thus speaks Booker. But what he and I talk about constantly is the ability of the current class of politicians to evade reality. By now, it should be self-evident to even to dimmest of brains that the global warming scare is idiocy, and the obvious inadequacies of the European Union should have long ago secured its demise.

The trouble is the very forces that brought these fantasies into being have also insulated the politicians from the consequences of their actions, not least with the suspension of democracy. Reality, therefore, is held in check, while the politicians continue to indulge in their fantasies long past the point when the cycle has moved on.

You would think that reality would force its way through, when people started getting killed but, in a third example of the conflict between fantasy and reality, Booker writes of the tragedy unfolding in the past few days in Camp Ashraf in Iraq. There, Iraqi and Iranian terror squads "have finally moved in to crush the 3,400 defenceless Iranian exiles who in 2003 gave up their arms in return for written personal guarantees of their safety by the US government".

Since Thursday night, more than 30 Ashraf residents have reportedly been killed and hundreds injured. This may, Booker states, be only a small example of the price so many others have had to pay for that act of folly when Bush and Blair sailed into Iraq like Don Quixote and Sancho Panza charging windmills.

But, he concludes, "our adventures in Afghanistan and Libya still have to unfold to the point where we are forced to recognise that yet another vainglorious act of make-believe has collided with reality". And, on that latter point, where the majority of British voters are against the mad project in Libya, it continues apace, with the support of the vast majority of MPs.

One could suppose that reality has simply been deferred, but the great genius of the British establishment has always to bend with the wind, changing gradually and thus avoiding catastrophic, revolutionary events. To bottle up reality, therefore, is not such a good idea. It can be deferred, but not denied. And the longer it is left, the more violent the collision.