Keeping us in the dark 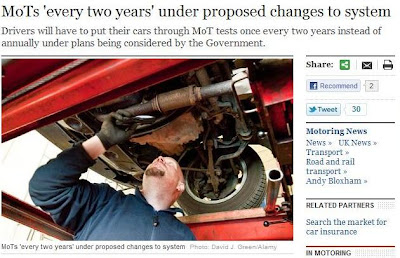 The Daily Failygraph is cheerfully telling us that "the Government" is considering making changes to the MOT inspection frequency. What it does not tell us, though, is that MOT certification and testing procedures are an EU competence, set out by Directive 2009/40/EC.

The reasons why the Government is now considering the change are two-fold. Firstly, new requirements are due to come into force on 1 January 2012, under Directive 2010/48/EU, so this is as good a time as any to make changes, when the inspection system has to be changed anyway, under the direction of Brussels.

Secondly, the EU in July last year issued a "communication" COM (2010) 389 final entitled: "Towards a European road safety area: policy orientations on road safety 2011-2020". Amongst other things, this set out an intention to harmonise throughout the EU the MOT procedures, the plan being to bring in a standard "EuroMOT".

Currently, the mandated inspection frequency can vary between one and four years – the UK adopting the more stringent period of one year, but the "European standard" tends to be a two year interval, on what is known as the 4.2.2 standard.

Thus, in France, vehicles concerned must be submitted for inspection within the six months preceding the fourth anniversary of initial registration, and then every two years thereafter – with a proposal for older cars to be inspected annually (after eight years).

While there is no specific requirement for the UK to come into line (yet), the writing is on the wall, and any changes to the MOT legislation must be approved by the EU Commission. Thus, our "Eurosceptic" government is playing the usual trick. In anticipation of an EU requirement, it is bringing domestic legislation into line with the expected (but as yet undeclared) standard. Thus, when the standard is brought out, we will already comply and the government can continue pretending that it is still in control.

The media, if it had the first idea what was going on, and/or took the trouble to keep its readers informed, would be wise to this game. But you need not expect the British media to report on EU matters of this nature – not when the name of the game is to support the politicians in their pretence that they still matter.

When you think about it, they too have a vested interest. The attention goes where the power is, and thus in the United States, the nearest things they have to a national newspaper is The Washington Post. When the British people finally wake up and realise we are ruled from Brussels, we can - in the fullness of time - expect the local (i.e., London-based) papers further to atrophy, and Brussels-based papers to take over - the Brussels Times, anybody?.

Keeping us in the dark, therefore, is a matter of long-term self-interest for the media, and it is about the only thing they are now any good at.