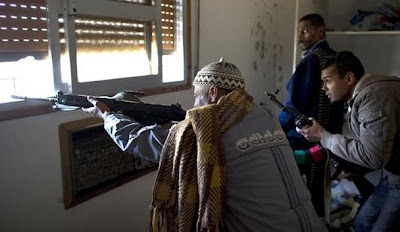 Thousands of people are fleeing heavy fighting in Libya's western mountains region, close to the Tunisian border, as government forces seek to crush a rebellion that has been largely overshadowed by the siege of Misrata, reports The Guardian.

According to UNHCR, about 11,000 refugees from the area have crossed into Tunisia in the past ten days, mainly from the city of Nalut. "They are fleeing because of shelling and intensified fighting between government and opposition forces," Firas Kayal of the UNHCR claimed. "The whole western mountains region has been under siege for two months now."

This we were dimly aware of. We learned some time ago that there were too few coalition aircraft to cover the terrain, so all sorts of things were happening outside their reach. I suppose if the boys and goils can tear themselves away from their swimming pools, they might pop over and have a look.

Better still, that nice Mr Scumeron might do the decent thing and pull out, and recognising that we do not have the resources or the political will to do anything, and that our (partial) presence is simply making things worse.