The morning after the day after 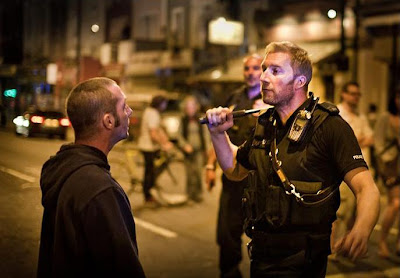 As the dust begins to settle on the Bristol riot, what is coming over with crystal clarity is that this was a botched police operation, and that the police are lying about what happened. The absurd Supt Ian Wylie (pictured below) is recorded claiming that the operation was sparked by fears that residents of the "Telepathic Heights" squat were planning to petrol bomb the local Tesco store, the subject of a local dispute.

The store, however, is a red-herring. Police claims are fabrications. Multiple witnesses, whose stories cross-check and make much more sense, attest to this. All claim that there had been an attempt by bailiffs earlier on the Thursday afternoon to evict the squatters from the building – with no warning, despite they having been there eight years.

Predictably, the bailiffs were seen off, leaving residents puzzling as to why the sudden urgency, and some suspicions that it was not unconnected with the Tesco protest, which was being organised from the squat. However, the issue was not left there as, about 9.15 pm the police arrived in force. Although the following day, the petrol bomb excuse was invented, the actual intent was to complete the eviction, with bailiffs accompanying the police. 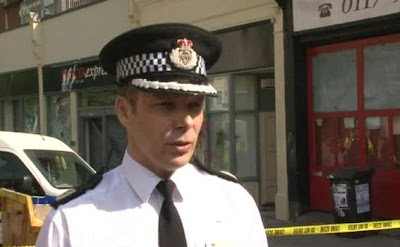 Jonathan Taphouse a local photographer reports that police arrived in force in the area on a warm, Easter weekend evening, with people drinking in the many bars and cafes along the street. They then blocked off the main Cheltenham Road, preventing people returning to their homes or moving about the area, and faced off the locals in an aggressive manner, maintaining their presence for some hours.

As Taphouse says, "the latent frustration boiled over" and a riot ensued. It was clearly provoked by the clumsy and insensitive police handling of the situation. Some of that is even picked up by The Independent, which cites Taphouse describing some officers as behaving "completely out of control". "It seemed that they didn't understand the politics of the area," he said. "It was only a few who kicked off, and there was no real need for a riot," he added. "Residents were woken up and some joined the protesters. This wasn't inevitable – the actions of the police caused the reaction." 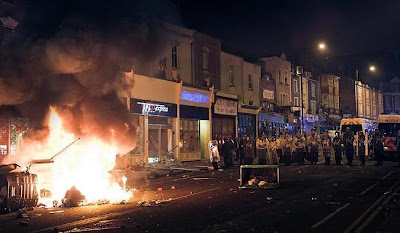 Also cited is Nick Jones, a primary school teacher, who says that a peaceful protest quickly turned ugly: "Between 2.30am and 4.30am there were bottles and rocks thrown. I saw a police officer get hit in the face and go down – he was taken away in an ambulance. People had weapons. They had swords and shields. It turned from 'interesting' to 'scary' very quickly."

Jessie Webb, a barman at The Croft pub, said police were "heavy-handed" towards a crowd which just turned up to watch the arrests. The police caused it [the riot]," he said. "They turned up in large numbers and it attracted a crowd. Then they charged into them." 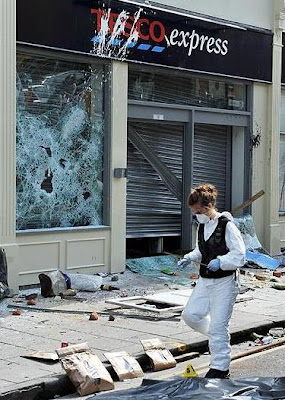 A 22-year-old, who did not want to be named, said he was hit with a baton despite not being involved in the protest: "I saw them [police] hitting people who were definitely not involved in the violence. They were doing random charges and cracking people indiscriminately."

Gus Hoyt, a Green Party council candidate for Ashley ward which includes the site of the Tesco store, said he had been "terrified" as the violence escalated, adding that the scenes reminded people of the riots in nearby St Pauls in 1980: "People who remember the 1980s can't believe this is happening again."

Taphouse adds that: "Police in riot vans from Wales turned up and it seemed that they didn't understand the politics of the area. Pushing the crowd in towards St Pauls didn't look to be the most intelligent thing to do. Police forcing protesters down nearby streets trying to defuse the scene achieved the opposite, and just ended up agitating the situation. More residents were woken up and alerted to what was going on, and this timed with the local pubs kicking out just added to the masses".

The Guardian is also beginning to piece together some of the story. It has Lewis Clapham, 22, a customer services worker, who says: "I wasn't involved in the protest or the squat. I just happened to be down there and I went up to the police and said I was just passing through, but one of them came and hit me really hard with a baton. I've got bruising all down my side now with massive swelling on my elbow".

Clare Milne, who lives in the neighbourhood, said she had witnessed from her bedroom window an unprovoked attack on a man walking along the street with a woman. "An officer whacked him around the lower back with a baton".

Some of this is corroborated by Bristol East's MP, Kerry McCarthy, who went down to the scene in the early hours of Good Friday after being alerted to the heightening violence, and was herself shoved by police. "The police steamed in and dogs were used," she says. "There were people being roughly treated."

McCarthy, who is a shadow Treasury minister, added: "I question why the police op was carried out in an area where a lot of people were out drinking. It didn't seem to be a particularly sensible time to carry out an eviction of a squat that has been there for a long time". And there it is - the local knowledge which gainsays the police alibi. This was a police-supported eviction, badly-timed and botched.

Thus does Taphouse conclude: "I can't help but feel that with better timing, and being more sensitive to local culture the night’s events could have gone very differently". 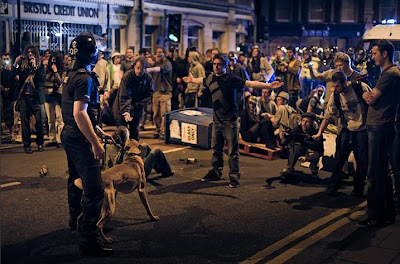 Our own local commentators will attest that the area has a history of inept policing, and the current mood is caught by the Independent newspaper, which talks of anger within Britain's protest and anarchist movements "mounting", alongside a willingness by some to fight police given the opportunity, after police in London were accused of aggression in dealing with anti-cuts demonstrators last month.

The real problem, though, is that – like the politicians – the police are in the land of the fairies. Avon and Somerset Police continue to maintain that its officers' actions had been "fully justified", and are sticking to their story that the discovery of petrol bombs necessitated the arrest of four "offenders", who represented "a very real threat".

Thus, we are not even in the territory of "lessons learned". Having provoked a full-blown riot, the police are not even aware that they have done anything wrong. So we get plod-in-chief Chief Constable Colin Port visiting the site to condemn "the attack on Tesco and other businesses", when only the Tesco store was damaged. He then says: "It's outrageous, completely out of order and will not be tolerated by the people of Bristol or the police". 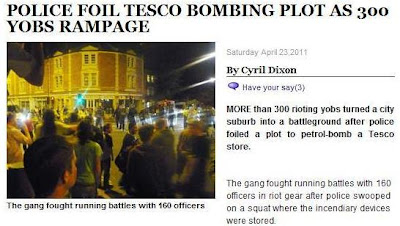 This is conveyed to us by the local newspaper, but what Mr Port probably does not realise – and the ridiculous Mr Wylie certainly does not – is that he doesn't have control of the message any more, and we no longer have to rely on local newspaper pap. A combination of bloggers, forums, local and national newspapers, all accessible through the internet, gives us a much wider picture than he probably had.

This also enables us to see through the frankly absurd headlines, with The Daily Express probably qualifying for the most crassly-written account so far. Then, God help us, they have that buffoon Patrick Mercer writing an "analysis". This is classic EVM. The man doesn't have the first idea what he's talking about.

Contrary to the Express fiction, what we see as "outrageous" is the serial incompetence of the police, their lying, their cover-ups, their arrogance and stupidity, all too often combined with abuse of power. Tied in with previous experience of the breed, this strips away any sympathy or support. I don't think these people quite realise how much the environment has changed.

Some photos by: Jonathan Taphouse.