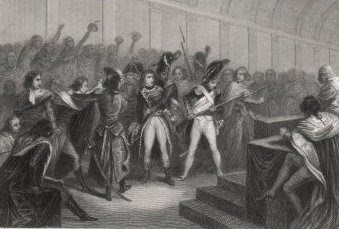 Portugal will be offered a bailout worth €80bn (£71bn), European Union finance ministers meeting in Budapest agreed yesterday, but only if the parties contesting the country's general election in June agree to a package of austerity measures and reforms. So, the set up is that the politicians decide between them what the voters will be allowed to vote for, and only then does the election go ahead – with no choice offered on the substantive issues.

Does this sound terribly familiar?

UPDATE: And his Grace gets the point:


The EU is one great quango: it is a democratic scam which permits the politicians of each member state to promise the earth to get themselves elected, and then blame "Europe" that their manifesto pledges could not be fulfilled. This then permits each political leader to stare their electorates in the face and say, quite truthfully, "Our hands were tied; we could nothing about it; we were bound by our treaty obligations, etc., etc".

This is the point which the Little Englanders and the dyed-in-the-wool UKIPites simply do not get. The European Union is not a conspiracy of foreigners, to take over and rule Britain. It is a conspiracy of the ruling élites, on a European scale to by-pass democracy. Our leaders are part of it, it is them, the British political élites, doing it to us.

And this is, of course, why the élites love "Europe" so much. His Grace has got it absolutely banged to rights. The ritual "washing of hands" about "Europe" is all part of the act.

That is how scum like Cameron can prattle on about regulation, knowing full well that nothing substantive can happen, because most regulation is made in Brussels. But as long as he can go through the motions, with his patsies in the British Chamber of Commerce, the CBI, the Federation of Small Business (all of which were suborned long ago), and the media pretend everything is normal, then he can get away with it.

In our book, The Great Deception, Booker and I wrote of the slow-motion coup d'état - which is precisely what has been happening – and why the book is routinely ignored by the "great and the good". Slowly, slowly, almost imperceptibly, the organs of states, and the most important institutions such as the BBC, have been taken over. Our democracy has been stolen from under our very noses, not by those ghastly foreigners or the filthy Hun, but by our own élites.

A while back, I wrote:


We are a satellite state of the Greater European Empire, ruled by a supreme government in Brussels. We owe this government neither loyalty nor obedience. It is not our government. It is theirs. It is our enemy.

That is my "signature" on the forum. I left it deliberately vague – but the "government" to which I referred was not the one in Brussels. It is the one in Whitehall. We have been taken over. It is the enemy. We are its foe.

At least now, it is getting obvious. And at least now, more people are being to understand what is happening. At least now, we can start the recovery process.