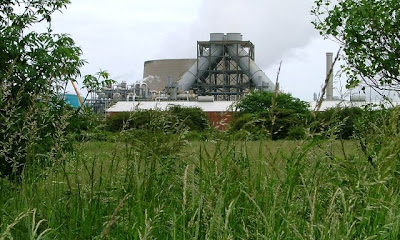 With this happening, we're possibly going to have to rethink our rhetoric on electricity generation. The story is that around 100 workers have been looking down the nose at redundancy as Teesside Power Station (pictured) drastically scales back production "in the wake of cheap energy imports".

We are talking here of a 1,875 megawatt (MW) plant - the largest combined cycle gas turbine (CCGT) station in Europe – which supplies up to three percent of the entire power needs of England, Scotland and Wales. However, capacity was cut to just 45MW from 1 April - effectively signalling a partial mothballing of the plant.

The owner, International Power, which owns and runs the facility is saying that this is a temporary reduction that will result in operating cost savings. It is, they say, "reflective of the weak market conditions in the UK". The plant will still be able to ramp up production if the market improves but, for the moment, it says, "demand for home-grown electricity has been hit by cheaper foreign imports".

The imports, one assumes, are from the Kermits – which would be hugely entertaining. To have us shut down a gas plant to buy nuclear from France is such an irony.

However, on the other hand, coal has taken such a beating over the winter that the eleven coal- and oil-fired power plants covered by the EU's large combustion plant directive in the UK hit more than half their quota of hours by the end of February,.

The plants have run for a total of 97,218 hours between January 2008 and February 2011, equivalent to 51.17 percent of their quota. The programme still has nearly five years to run but LCPD forces eight UK coal-fired units to close after 20,000 hours and three oil-fired plants to close after 10,000 hours of operation, or by December 31, 2015, whichever comes first. At this rate, the entire estate could be closing down up to two years early.

We may have a short-term glut in hand – but the near future looks distinctly shaky. Crunch time could well come by 2013. And little Scumeron could be in the driving seat, having to face the music. We can then all share his pain!