This can't possibly be true 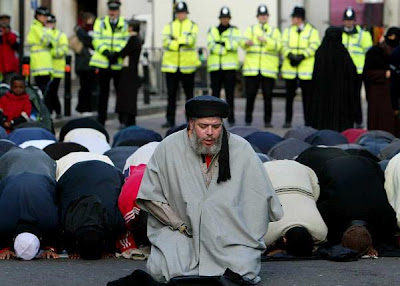 The [Wikileaks] files help to explain American anger towards the British authorities, who have been regularly accused of failing to tackle radicalisation in this country. They show how Muslim men travelled to European countries such as France, from where they obtained fake EU passports. They then crossed the channel to take advantage of Britain's generous asylum system.

Extremist preachers radicalised the men at London mosques, showing them videos of atrocities committed against Muslims in Bosnia and Chechnya. According to one document, Finsbury Park mosque was "a key transit facility for the movement of North African and other extremists in London to and from al-Qaeda training camps in Afghanistan".

All this, of course, we find completely implausible. After all, as we observed five years ago, the police act with perfect impartiality and absolute efficiency. The idea that Britain is a haven for Muslim terrorists, who are attracted by the over-generous benefits, is absurd. In any case, as sure as this happens, our politicians would never allow this to happen. They would stop any abuse immediately.