A message from an alternative universe 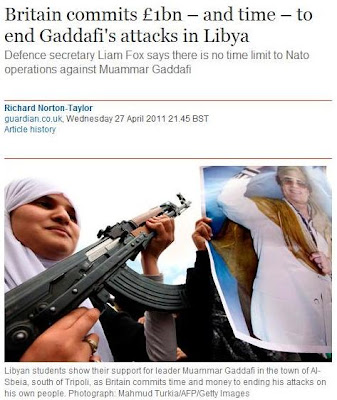 When it comes to ripping off each others' stories, the blogs are sweet innocents compared with the MSM, who quite routinely copy and paste from their competitors, without so much as a hint of acknowledgement or attribution.

However, one had to permit a wry smile after the Sunday Times piece on 17 April, which lifted the lid on the boys and goils suffering the hardship of four-star hotels on the Adriatic Riviera, as they zapped Gadaffi's finest.

What was interesting there was that none of the other newspapers ripped off the story. It remained very much a Sunday Times special. My guess is that the bulk of the media is so imbued heroic "Our Boys" narrative that the idea of them idling by the luxury swimming pools, at great cost to the taxpayer, did not fit the preferred narrative.

However, what did come out of that story was that the Libya adventure was likely to cost us taxpayers in excess of £1 billion, before taking into account the actual cost of operations.

So horrendous is that figure that one would have thought the media would have been only too quick to run with it – but not a bit of it. The nearest we are now getting is today's Guardian, which has 13th Fox tell the Commons Defence Committee that the cost is "estimated to top £1bn by the summer".

Well, that is sort of in the same league as saying my Council Tax bill will "top £500" – accurate as far as it goes, but not really giving an honest impression of how much money is involved. One can expect at least double that amount, and most likely considerably more, especially as Fox is saying that the commitment is "open-ended".

What we are getting though is spin all the way, as the story is picked up by the Press Association as well, and you can see that the "line" is one of reassurance: the extra cost is to come out of the "Treasury Reserve" rather than the defence budget.

Presumably, we are supposed to say, "that's alright then", as if money in that account grows on trees and hurts the taxpayer less than if it comes under a different budget heading. We are also, one assumes, supposed to be gulled by the wilful underestimate of the cost, so that we can go back to sleep as the Cameron adventure continues to commit vast amounts of money we haven't got, to very little immediate effect, and which is probably going to do more harm than good in the longer-term.

Our problems are, however, that the bulk of MPs support this obscenity and the media is showing about as much guile and intelligence in writing this story as it does with just about everything else.

In truth though, they are all treating us with the usual dose of contempt, as we see from the Metro, where Fox is quoted as saying that the Nato mission was "within the realms" of what had been envisaged under the government's defence review.

That is just so untrue that it would be laughable, but for the fact that the defence secretary has actually trotted it out. But then he told the Committee: "It is very important these issues are discussed but it is more important that we send a clear message we are not going to be limited by pounds, shillings and pence but we have the resolve to see through the mission".

"We are not going to be limited by pounds, shillings and pence?" You do wonder about which planet Fox lives on, but it surely isn't this one.