Oooh! The hardship of it all 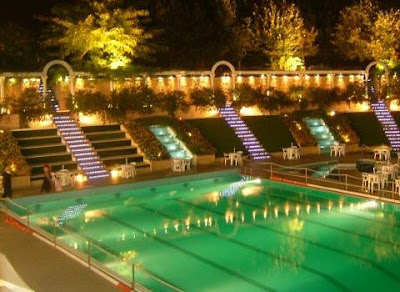 While Dave basks in the reflected glory of saving all those plucky Libyan rebels from a fate worse than death (not), it seems that the Brylcream boys and their bomber baron friends are being forced to slum it in four-star tourist hotels in the Adriatic resort of Conversano.

At one, the Grand Hotel d'Aragona, over 100 RAF pilots and their support staff are said to having to hide the shame of living on a package rate of about £50 a night, including half-board – and so austere are the conditions (pictured) that they are doubtless getting hardship pay as well.

However, just the en suite costs are getting on for about £150,000 a month, and then there are about other 600 of "our brave boys" having to slum it in similar Mediterranean resorts, under similar conditions of hardship. That puts the hotel bill up to about £1.2 million a month. But since that is only the price of one of their Storm Shadow bombs, the MoD bods must reckon it is good value, especially as it is us and not them paying the bills.

However, it seems that we are also paying rent to the Ities for the use of their nearby air base at Gioia del Colle, to the tune of £30 million a week, which rather puts the drinks and swimming pool bill in the shade.

Since we are supposedly helping out the Italians, not least helping to restore their oil contracts with whoever takes over, this is redolent of the British Army having to pay rent to the Kermits for use of the trenches in France during the First World War.

That, incidentally, was denied by no lesser personage than Winston Churchill, although he did admit that we paid £25.5 million for the transport of British troops on French railways (about £3 billion-plus in today's money).

We paid our war expenses, said Churchill and various arrangements were made which can, of course, "from time to time be represented in an unfavourable light by persons who by implication or otherwise have anti-French bias". You bet!

Anyhow, in current money, it looks as if keeping the boys and goils out in the sunny Med is going to cost well over £1 billion for the projected six-monthly deployment, and that is even before they start playing with their toys or dropping any bombs.

Retired Admiral Sandy Woodward, it seems, is a little miffed, as he is saying that this is more expensive than running a carrier, even with the toys thrown in. But then, nothing is too good for our brave boys and goils, especially when we are paying the bills. Trebles all round, and pass the suntan cream!!