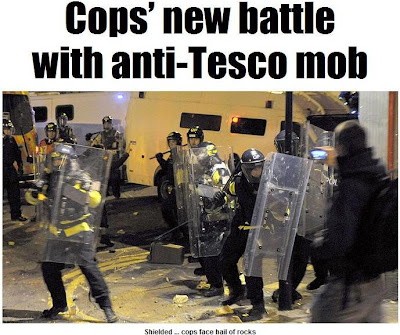 Fourteen riot vans were cruising the Stokes Croft area of Bristol last night – three of them Welsh, containing the finest thugs the principality can supply – the best part of a hundred police. Thus have community relations deteriorated, to the extent that the police only dare go into the area mob-handed, tooled up with sticks and riot gear.

All they are doing, of course, is picking at the sore – an army of occupation imposing their writ through violence and thuggery. The first riot was triggered by them, their intrusive, aggressive and ill-judged policing. The second riot was a protest against the police behaviour in the first. The main players, directly involved in the events say so, and even the Tesco spokesman agrees that it is not about the supermarket.

Yet, despite all this, the brain-dead media can't cope with the idea that, in one of Britain's major cities, we have a police force out of control. Instead of investigating and reporting the situation as it is, they continues to trivialise the events, labelling the disturbances as "Tesco riots".

Classic of the genre is the mind-rotting Sun newspaper, which parades its ignorance and prejudice with: "Cops' new battle with anti-Tesco mob" (above), publishing a series of lurid pictures and even more lurid prose that completely misses the point.

Different only in style rather than accuracy is The Daily Failygraph with its headline parading: "Two charged after police injured in Tesco riot". Continuing the meme, the strap tells us: "Two people have been charged by police after protests against the opening of a new Tesco store turned violent".

Then, in a classic example of why local newspapers are not worth buying, we have two offerings from the Bristol Evening Post. Having studied the videos of the event, read carefully the dozens of eye-witness reports and then pieced together a relatively, coherent narrative, it really is very clear that this was a spontaneous uprising against the police, and that upwards of a thousand or more people were involved. This was not a "small minority" of troublemakers – it was the larger part of the Stokes Croft community.

Yet, first in this piece and then this, the local newspaper attempts to project the falsehood that the disturbance was caused just by a minority, "nothing more than mindless thugs, intent on destroying property and inflicting serious injury".

Inevitably, the meme is picked up by the local MP, Stephen Williams, a Lib-Dim who displays the classic stupidity of the breed, condemned the violence in Cheltenham Road, and describing it as a "bad advert" for the city.

After spending several hours with the police yesterday, to get his indoctrination correct, and speaking to a carefully selected group of residents, the mighty mouth feels that legitimate, peaceful protests against Tesco had been spoilt by a minority determined to make trouble. "This has been hijacked by hard-left, extreme anarchists or anti-capitalists ... These people, I don't know what they are – self-indulgent vandals – probably in a few years' time they will be going on nice middle-class skiing holidays".

At least, when one is confronted with genuine "mindless thugs", there is some sort of remedy, but against "mindless MPs", there is little protection. "The police have to defend themselves, local people and property", the moron dribbles. "I hope it will end peacefully and we can move on".

Highlighting these falsehoods is very far from pedantry. When the media and MPs get it this wrong, we are in very grave danger from a police force which is already dangerously out of control and over which there seems little restraint.

We are now learning of a police operation in London where twenty squatters were arrested ahead of the royal wedding. Police sources said the raids were made as part of investigations into recent outbreaks of disorder in central London, including student and anarchist riots. "These arrests are part of ongoing proactive work to tackle suspected criminality," a Scotland Yard spokesman said.

This is perilously close to the fictional doctrine of having the police arrest us for what we might do, rather than what we have done. By the time this becomes established, the fears that we are lurching into a police state will have come true – by which time, or course, it will be too late.

What stands between us that that state are active, alert MPs and a robust, free media. Yet we no longer seem to have either. Instead, we are in the grip of the narrative. When that takes hold, we are in serious trouble.