The fool rushes in 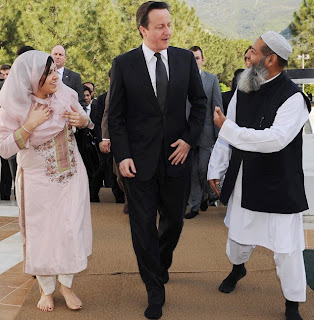 I am not quite sure where to start, on this latest piece of stupidity from Cameron (pictured - the thing to the left of the picture, by the way, is the Conservative Party Chairman).

Anyhow, this excuse for a British politician has told a group of Pakistani academics that Britain "is responsible for many of the world’s historic problems, including the conflict in Kashmir between India and Pakistan".

Of all the problems in the region, though, Britain is quite possibly least responsible for the situation in Kashmir, which remains to this day an occupied country, split between India, Pakistan and China.

This stupidity seems even to have stung Peter Oborne into a denunciation, which, considering his earlier, grovelling pieces about the Boy, is saying something. But here we have him writing about "David Cameron's sloppy and poorly informed remarks about the role played by the British Empire in creating the conditions for the contemporary conflict in Kashmir".

The Daily Mail, incidentally, is getting worked up about the amount of aid being paid for Pakistani schools – with £650million on offer at a time when the education budget at home is being cut. The paper notes what that amount of money could do to our own education budget ... 4,333 pupils being sent to Eton for a full secondary education, is one unfortunate example.

Seán Lang, a senior lecturer in History at Anglia Ruskin University, where he teaches British Imperial History, accuses the Boy of "touting for applause". "His comment was simplistic and trendy - more PC than PM. I certainly wouldn't accept such a sweeping generalisation from one of my own students", he says. "Perhaps the Prime Minister should spend a bit of time over Easter back at Eton, where the very strong history department could quickly put him right". That leaves 4,332 places.

One has to ask, though, whether there is any natural limit to the stupidly of this man, who seems to have the unerring instinct for saying the wrong things, at the wrong time, to the wrong people. It is hard to believe that Cameron could have acquired this level of perfection naturally. He must have been working on it for years, but it is now getting to the point where you even cringe at the thought of what he might say next.