Why do they play these games? 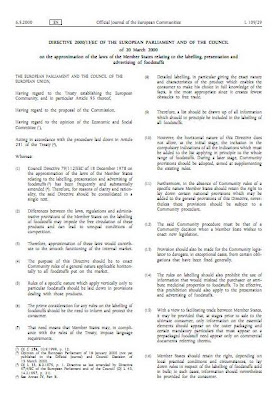 "The 'best before' dates on food packaging are set to be scrapped in a drive by ministers to stop millions of tons of perfectly edible produce being thrown away each year". So says the Sunday Failygraph today, in a pathetically inadequate report which misses out two absolutely crucial words: "European Union".

The point is, of course, that the "best before" dates are not going to be scrapped. This is because food labelling is an exclusive EU competence and the provisions are set out in Directive 2000/13/EC of 20 March 2000 on "the approximation of the laws of the Member States relating to the labelling, presentation and advertising of foodstuffs" (pictured).

The Directive is transposed into British law by the Food Labelling Regulations 1996 as amended (several times), and there are absolutely no plans to amend the Directive, or change the Regulations.

Nevertheless, the Failygraph is telling us that it has "learned" that the Cleggerons want "an end to the confusing proliferation of instructions on food labelling which have greatly expanded over the past decade".

Thus, we are told, instead of marking food "best before" a certain date, retailers will in future have to produce labels which give details of the health risks associated with individual foods that remain on shelves or in the fridge for a lengthy period before being consumed.

Bluntly, the story is wrong. The Directive remains in force and ministers are not in a position to abolish "best before" labelling on pre-packed foods. Furthermore, if or when there is any change, it will come from Brussels, not Whitehall.

Interestingly, the Baby Failygraph did a story on this on 12 July 2010, with the heading "Best-before' is well past its sell-by date". It was written by Philip Johnston who suggested that: "A 'use-by' date would stop billions of pounds of food being thrown away".

This was on the back of research by Morrisons, the supermarket chain, found that 55 per cent of people will throw away an item that is past its "best-before" date, despite the fact it is safe to eat. Every year as a nation we chuck out an estimated 400,000 tons of perfectly good food because we think it has gone off, or is about to, when it hasn't and isn't.

But, like the present writers, Johnston omitted those magic words "European Union", as he so often does. Nothing happened after his article, and nothing can until the EU decides to act.

So why, oh why do our journalists and politicians play these silly games? What is it about them that they can no longer deal with the real world, and admit that we no longer make our own laws in a whole raft of areas? How much longer do we have to put up with stupid, empty stories like these?